The Kimono Forest at Arashiyama Station in Kyoto. 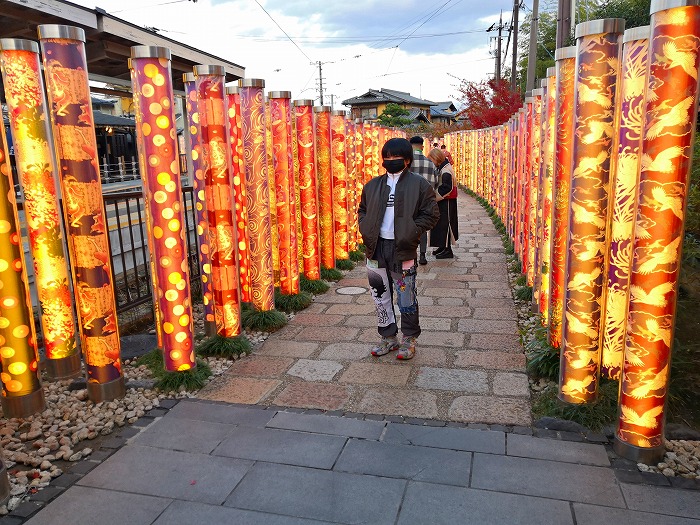 The Kimono Forest in Keifuku Electric Railway Arashiyama Line Arashiyama Station.
Randen Arashiyama Station, with the catchphrase “Hannari Hokkori Square”, reopened in July 2013 after renovation.
An interior designer, Yasumichi Morita, installed a Kyo-Yuzen illumination called “Kimono Forest”.
At the time of the renewal, the ticket gates were also abolished, making it possible to freely enter and exit the entire station without a ticket, thanks to that, “The Station footbath at Arashiyama Onsen” was also able to freely enter and exit.
The store area were also expanded, and the development of the station brought it a change to be as a tourist and commercial area. 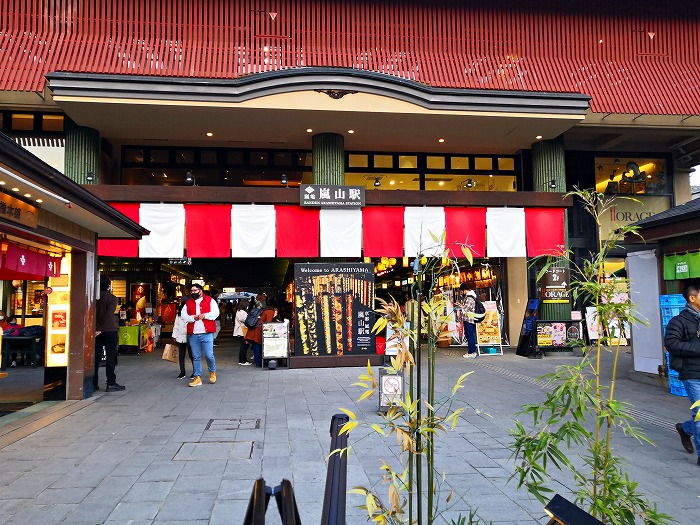 Kimono Forest is located along the platform of Arashiyama Station.

When you enter Arashiyama Station, it’s more like a commercial facility than a train station. 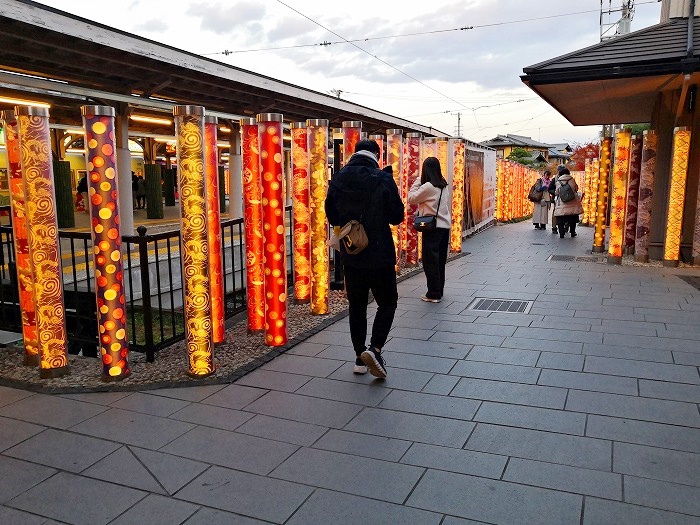 There are no ticket gates, so it’s only when you get to Kimono Forest then you realize,

“Oh, I can see the tracks, so this is a station platform!” 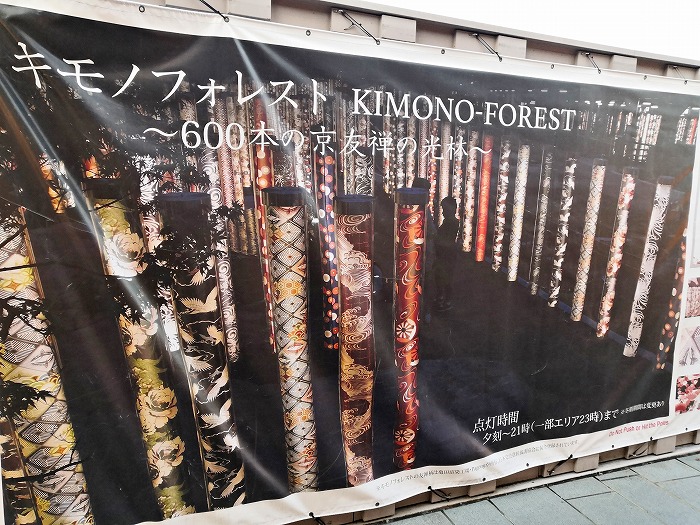 600 Kyoto Yuzen light forests.
Lighting time: From evening to 21:00 (until 23:00 in some areas) *The lighting period is subject to change. 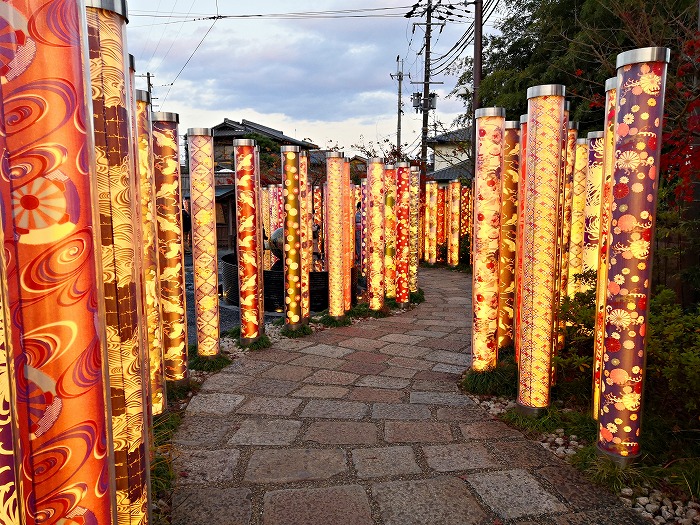 There are a total of 32 patterns for Kyo-Yuzen kimonos, so you can enjoy looking for poles with the same pattern. 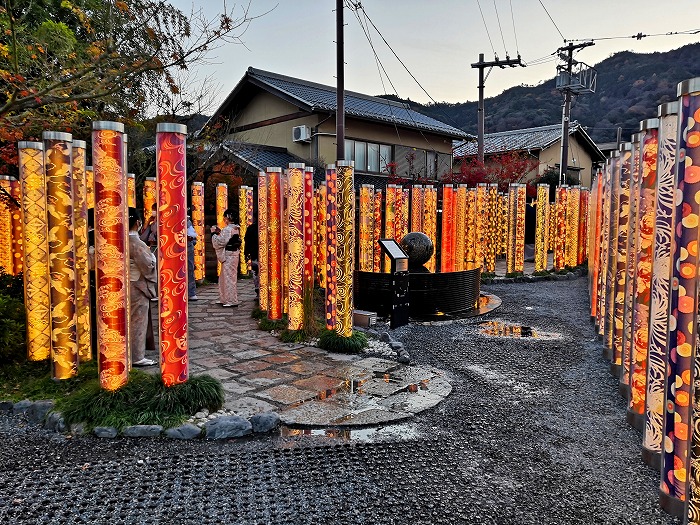 After passing through Kimono no Komichi, there is Ryu no Atago Pond.

The water in this pond is Subsoil water from Mt. Atago, which springs from 50m underground.

*Mt. Atago: A sacred mountain with an altitude of 924m located in the northwest of Kyoto city.

*Subsoil water: Underground water that flows in the lower layer such as riverbeds. 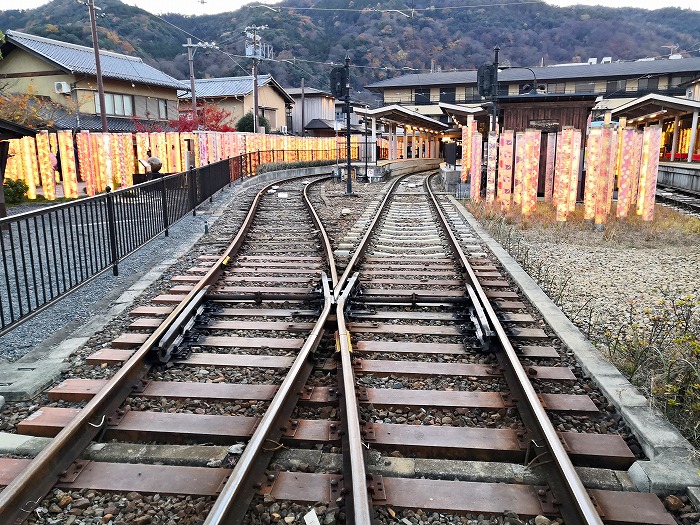 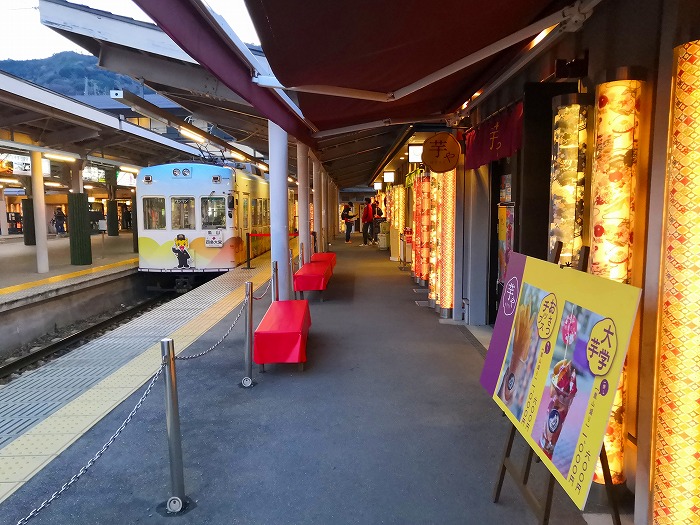 Since the ticket gates have been eliminated, shops can now be placed along the platform, people who do not have a ticket also can now use the shop.

Thanks to the Arashiyama Onsen Station Footbath, Kimono Forest, and the renovation of Arashiyama Station, the nostalgic atmosphere of the local train station is no longer the only attraction.

The Map of The Kimono Forest at Arashiyama Station in Kyoto.