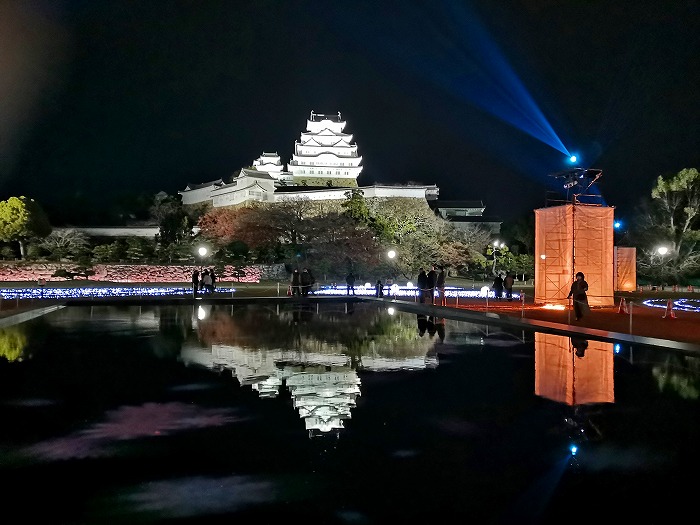 After crossing the Akashi Kaikyo Bridge from Awaji Island, We arrived at the parking lot of Himeji Castle at 8:08 pm.
Himeji Castle can be seen from even a distance from Otemon Street, which runs from Otemon(Main gate) to JR Himeji Station, and It looks more conspicuous when it is lit up.

Himeji Castle is also known as “Shirasagi Castle“, and in May 1993, along with Nara’s Horyuji Temple, it became Japan’s first World Heritage Site (*1), and It is a national treasure and one of the 12 surviving castle towers.

Himeji Castle had escaped from the fire of wars, like The Boshin War(*2) and World War II(*3), Therefore, it is sometimes called “Castle of no War“.

From 1580 to 1583, Toyotomi Hideyoshi (Hashiba Hideyoshi at that time) lived here, and it is also known for hosting a large tea ceremony.

*1: Registered at the same time, but in terms of project number, Horyuji was earlier with 660, and Himeji Castle with 661. [Reference] UNESCO World Heritage: Himeji Castle

*2: The Boshin War is at the end of the Tokugawa shogunate to the Meiji era, from Kinki to Hokkaido, the new government army and the former shogunate army fought Japan’s largest civil war.

*3: During the World War II, many castle towers were damaged by US air raids, also Himeji Castle was hit by the bomb, but it did not suffer much damage. 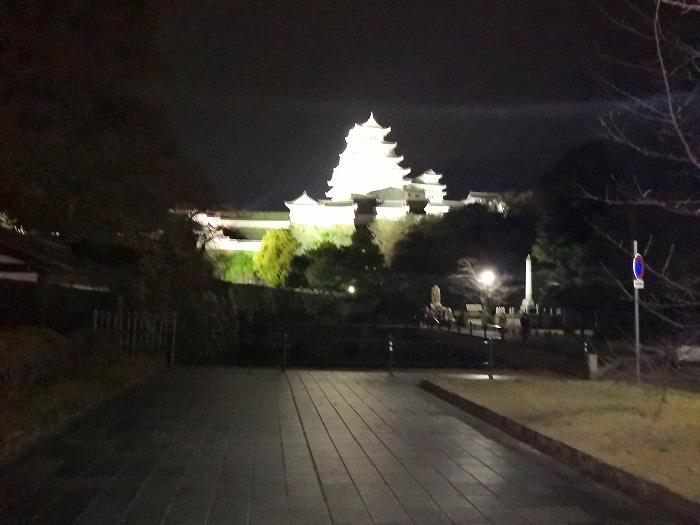 After 8:00 p.m., I parked my car at Himeyama Parking Lot, which seemed to be the closest to the castle tower. 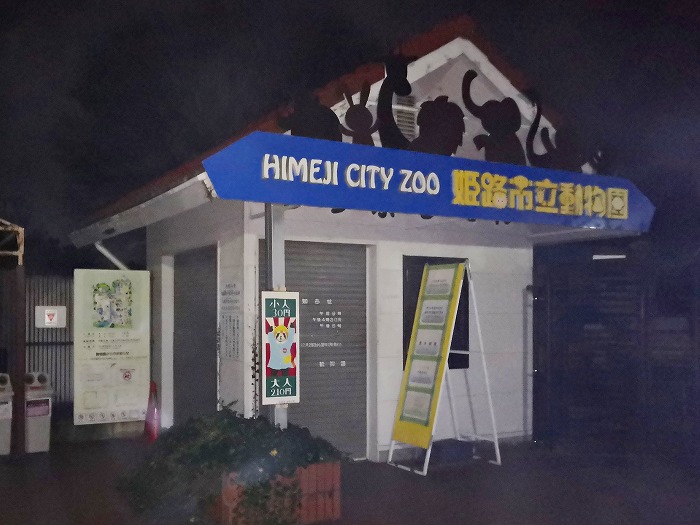 There is “The Himeji City Zoo” on the way from the Himeyama parking lot to the castle tower.

Well, it can’t be helped because the sunset time is about 1 hour different from Okinawa, but when I came to Kinki, I thought that various facilities close early. 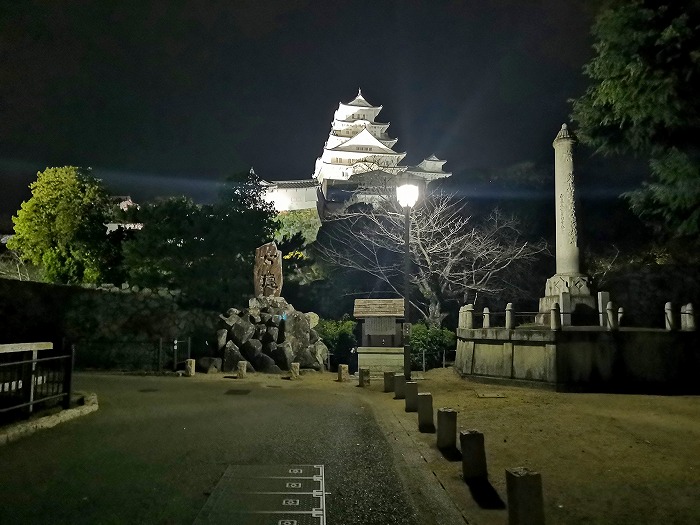 The castle tower looks even more beautiful when you come close to the illuminated Himeji Castle.

The pagoda on the right is a historic site, the loyalty monument of police officers who died in the line of duty.

The stone monument in front is the “National Restoration Prayer Tower”. 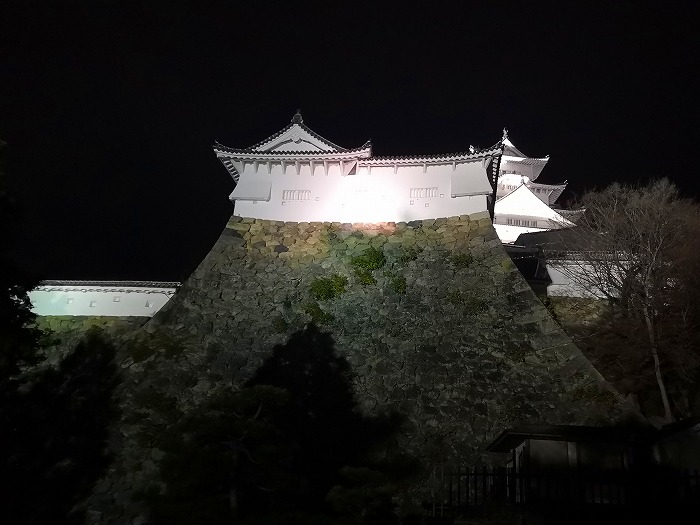 The height of the stone wall is amazing. 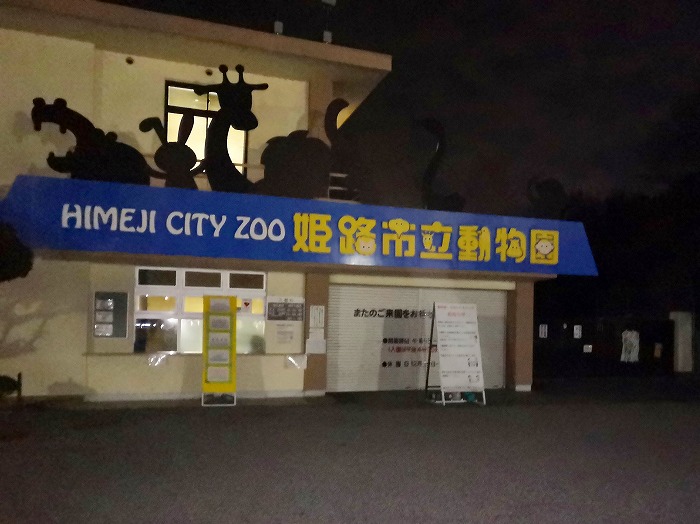 When we turned to the Sannomaru Square side on the Otemon side, there was the entrance of “Himeji City Zoo” there as well. 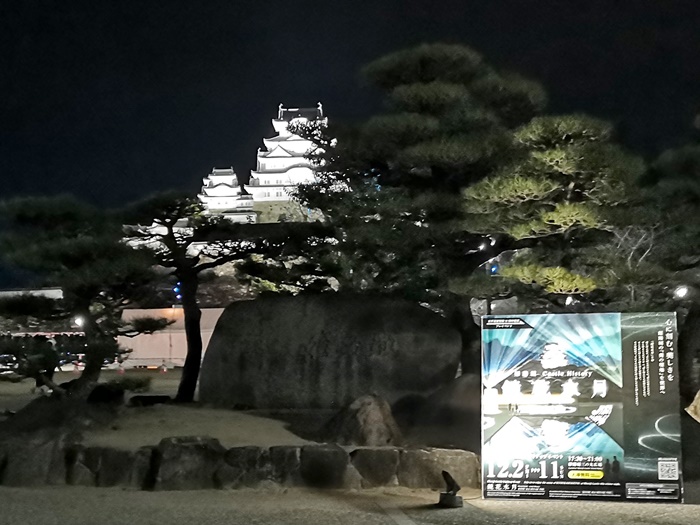 On this day, a light-up event called

was held at Himeji Castle Sannomaru Square, and we were so lucky, that day was the last day.

* “Kyoka Suigetsu(鏡花水月)” means that refers to the elegance of looking at the moon reflected in a water mirror. 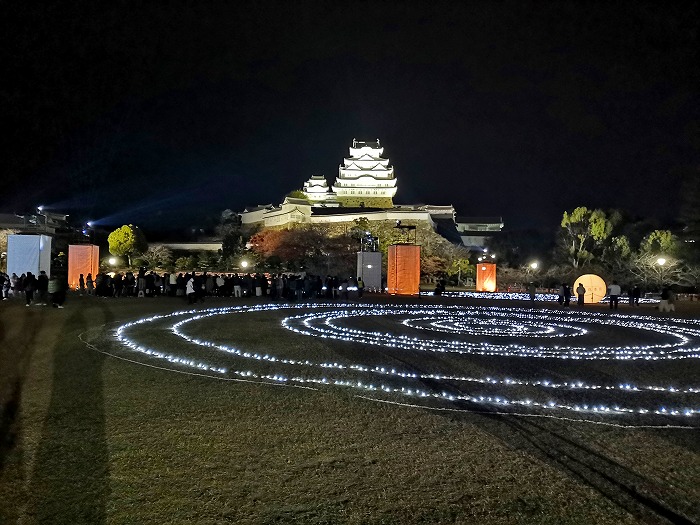 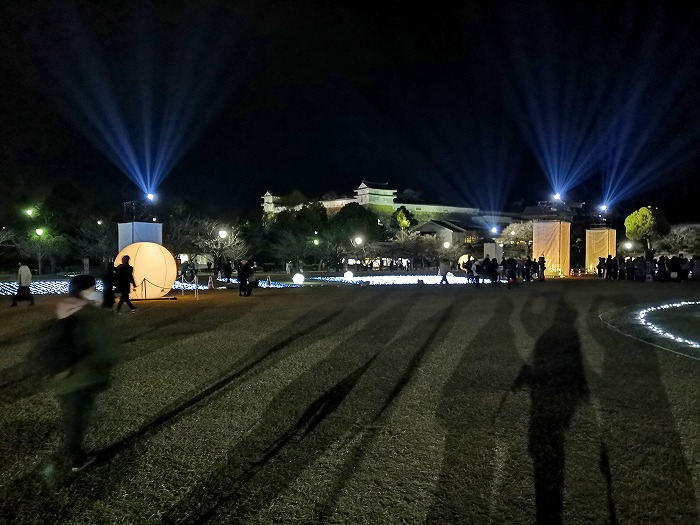 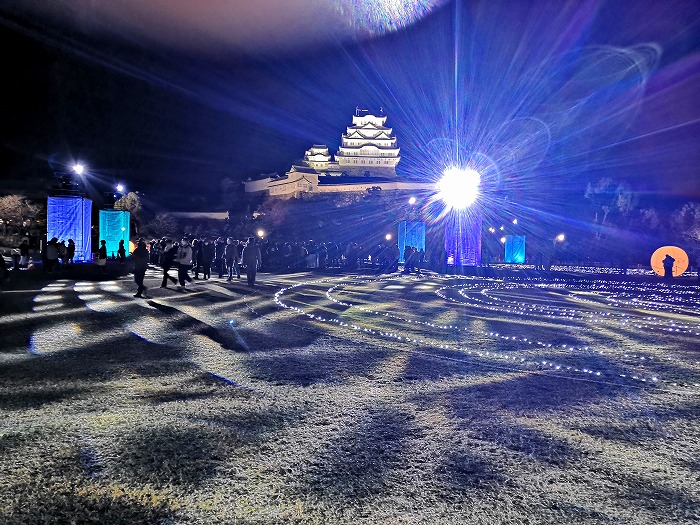 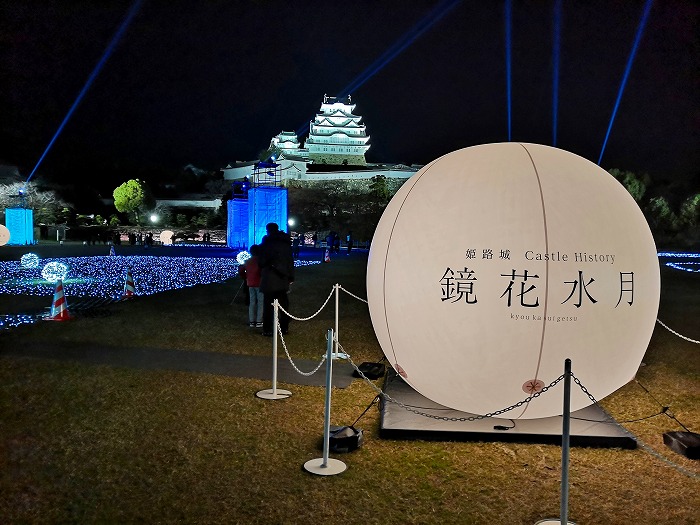 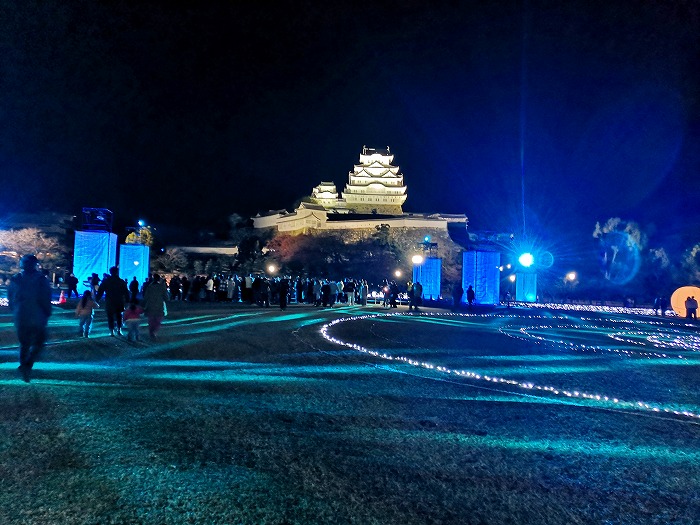 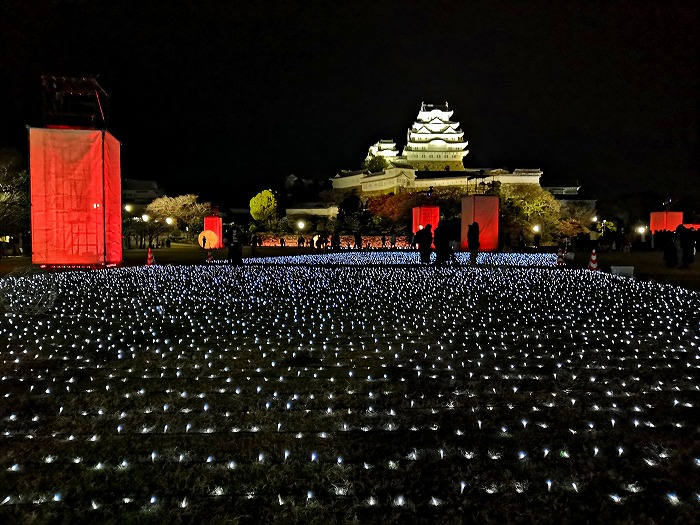 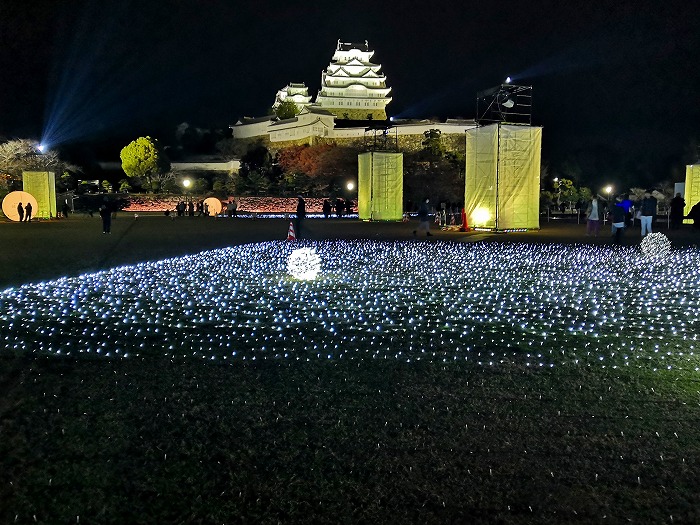 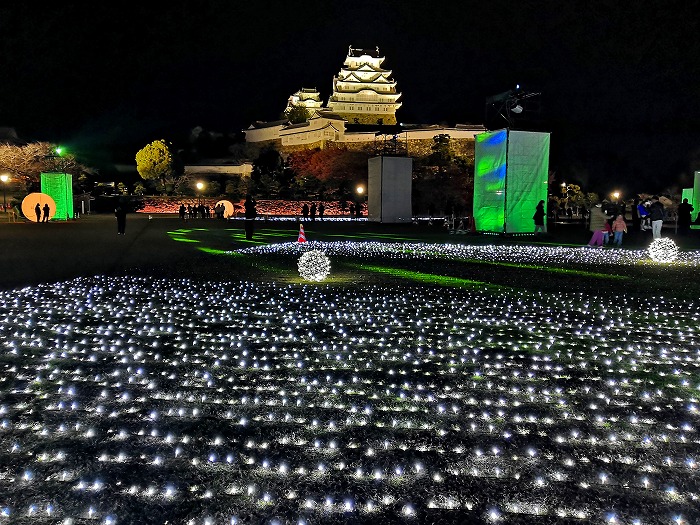 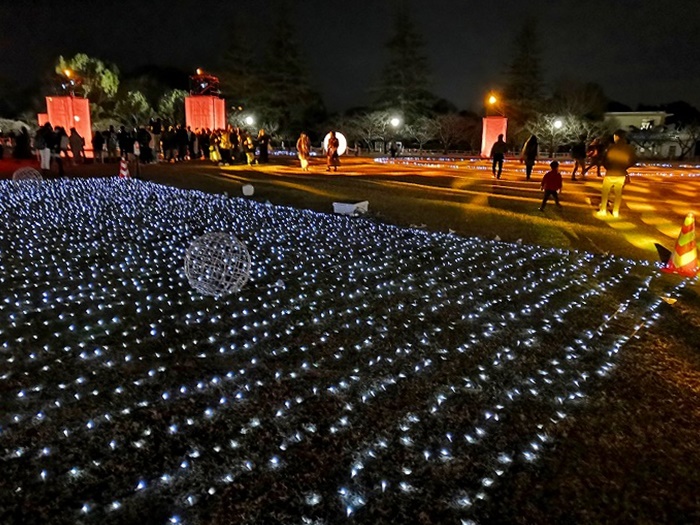 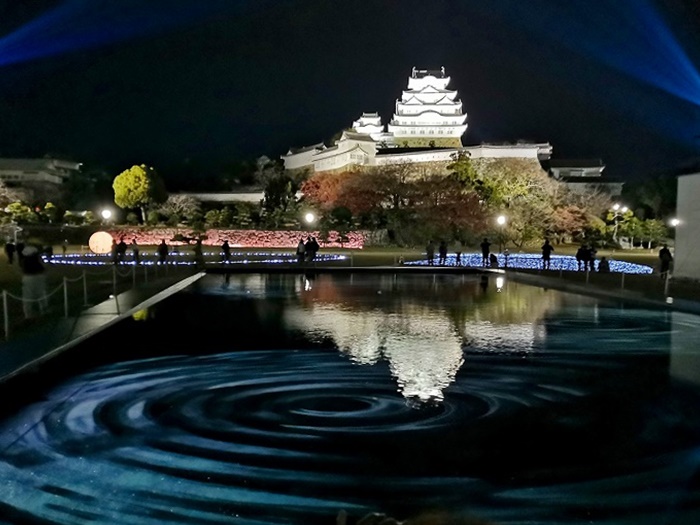 The upside-down Himeji Castle, which had been completely reflected in the water just a moment ago, crumbled with just one ripple.

“Kyouka Suigetsu” is a four-letter idiom that expresses the ephemeral beauty and flavor that can be seen, like flowers and the moon reflected on the surface of the water, but cannot be touched by hand. 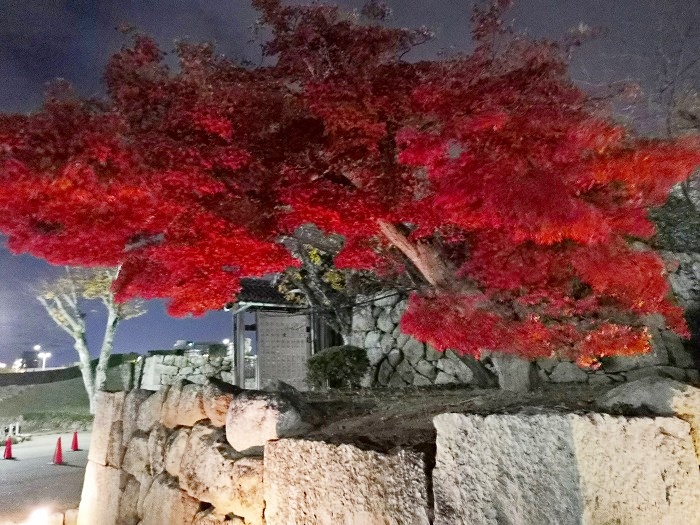 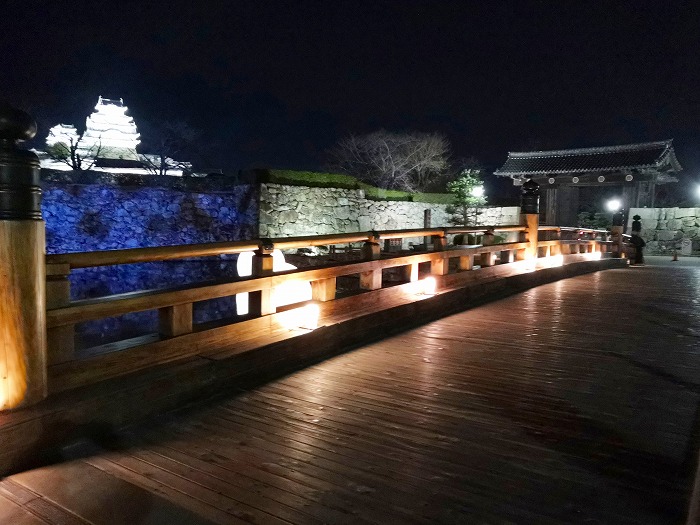 The Sakuramon Bridge and the Otemon Gate are also lit up. 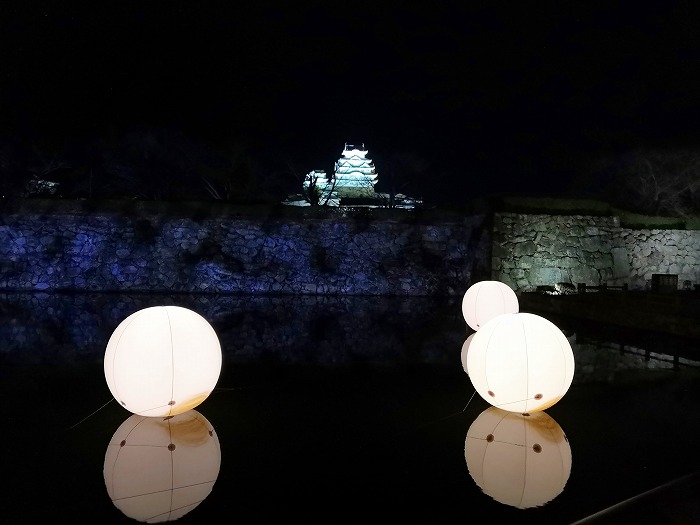 The moat is also illuminated, and the lighting of Himeji Castle is fantastic. 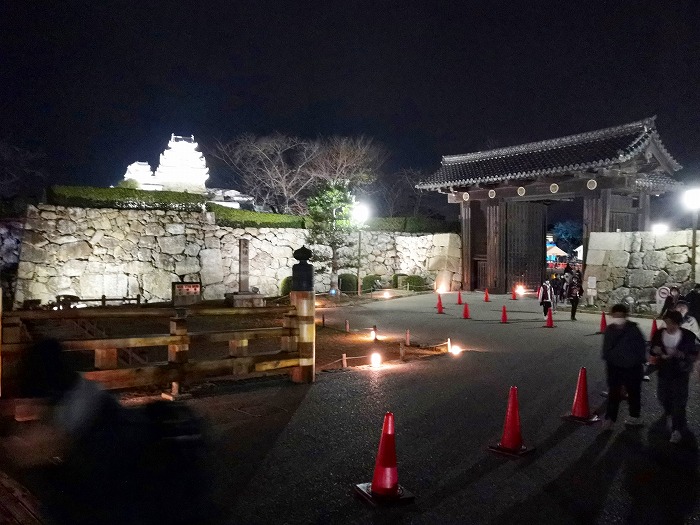 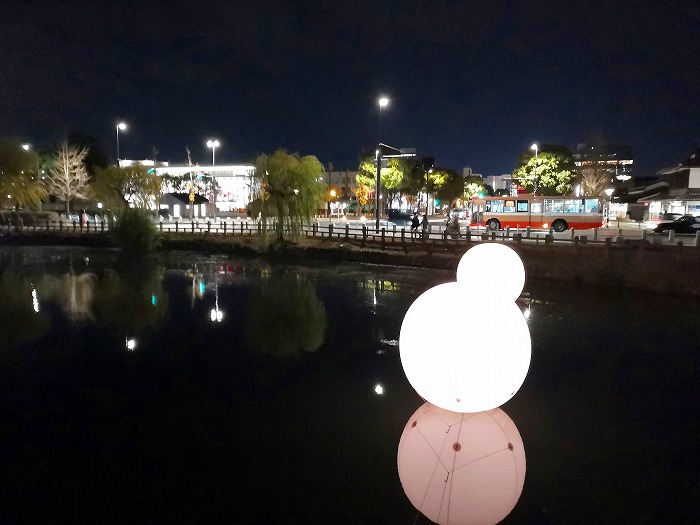 The streets and illuminations in front of Himeji Castle Otemon.

The city of Himeji is well maintained and beautiful. 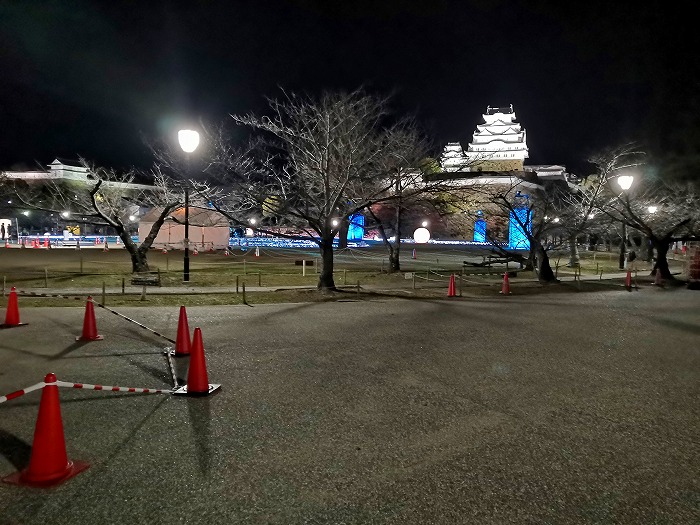 After 21:00, the event on the final day of Himeji Castle History – Kyoka Suigetsu ended, and the cleanup of the venue began.

It was a very lucky event that I was able to witness the last moment of the last day of the 10-day event.