Blue Seal Ice Cream was established in a US military base in 1948 with the aim of raising the morale of the US military stationed in Okinawa after World War II and providing a nostalgic taste of America, started only selling for US military personnel.

Then, in 1963, sales to the private sector in Okinawa began for the first time, and a flagship store was opened in Naha City, quickly establishing itself as a taste of Okinawa.

After the company transferred ownership to a Okinawan company, products using red sweet potatoes and bitter melons were developed, and in 2009, the company expanded into the Kanto region by opening a base in Shibuya, Tokyo.

The catchphrase of Blue Seal Ice Cream, “Born in America, raised in Okinawa,” is based on this story. 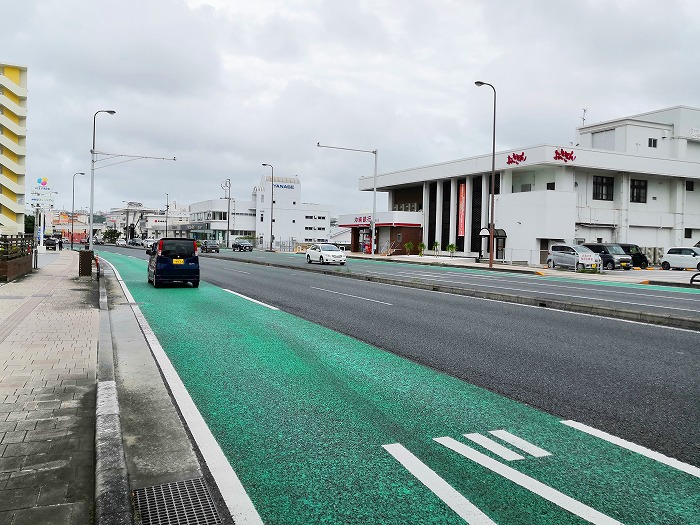 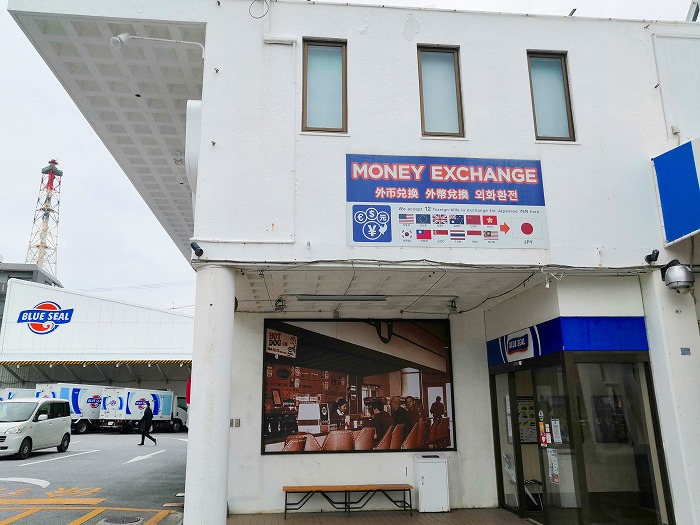 Before the outbreak of COVID-19, nearly 3 million foreign tourists visited Okinawa annually, and in order to cope with the rapid increase, money changers were installed in all kinds of commercial facilities, and Blue Seal is no exception. 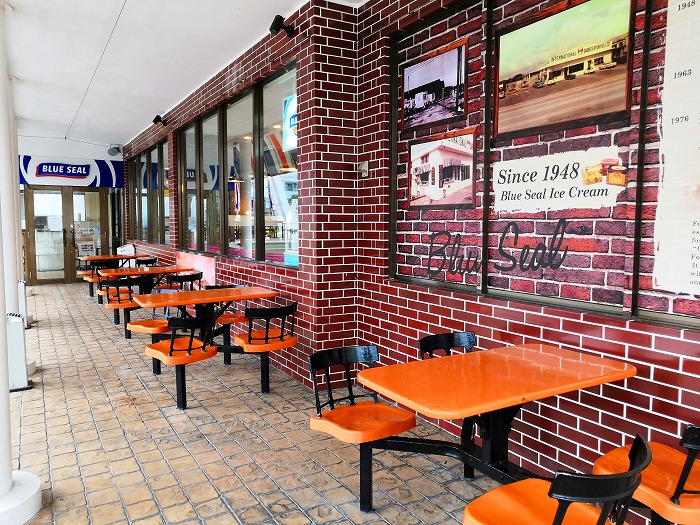 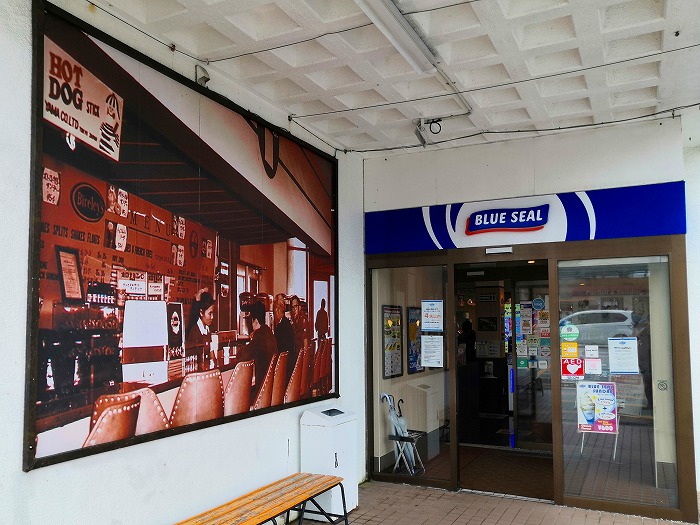 At the entrance of the Blue Seal Makiminato flagship shop, there is a sepia-toned big photo of the store that conveys how it used to be. 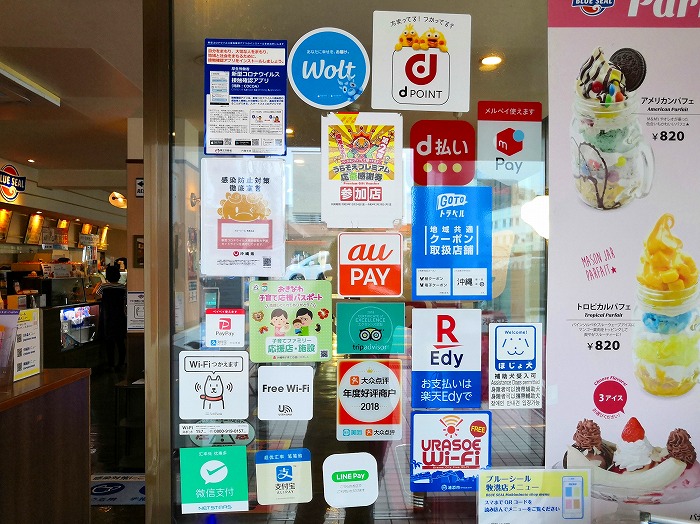 On the other hand, on the glass door, there are stickers of payment systems that can be used and stickers for covid-19 countermeasures, which shows these days.

There was a doll of an American soldier sitting at the counter seat, but to my surprise he was wearing a white mask.

Bright red box seats are lined up behind the counter seats. 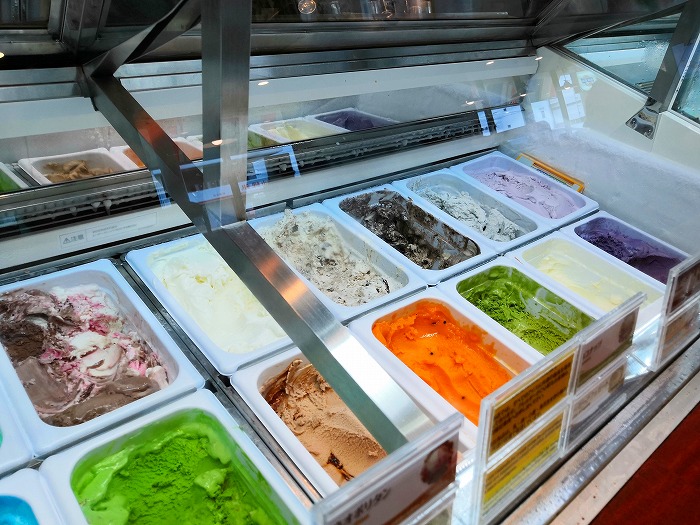 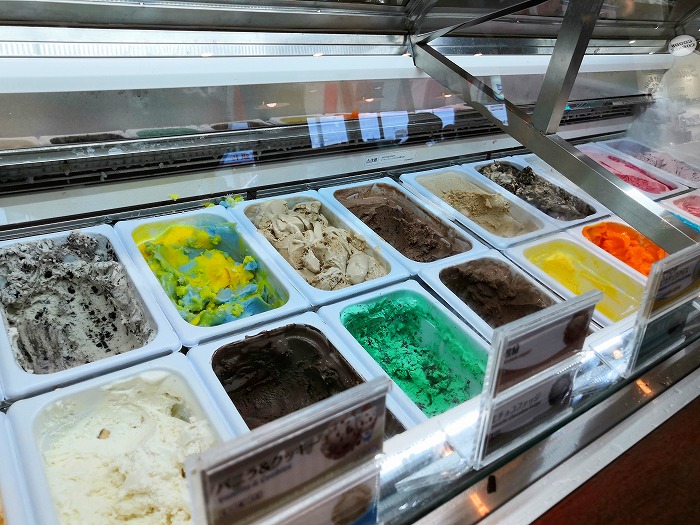 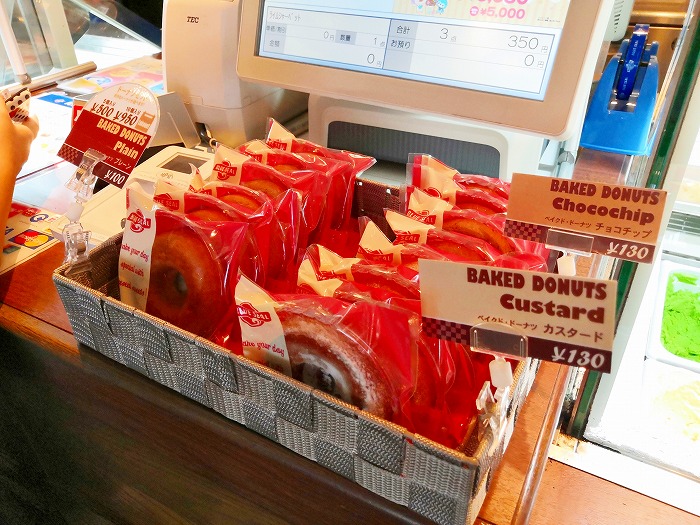 Donuts are also placed in front of the cash register. 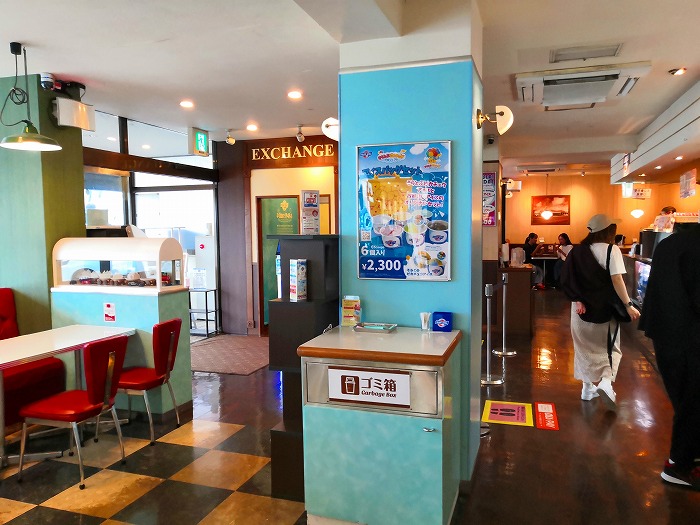 The inside of the store is not so large because it was built a long time ago. 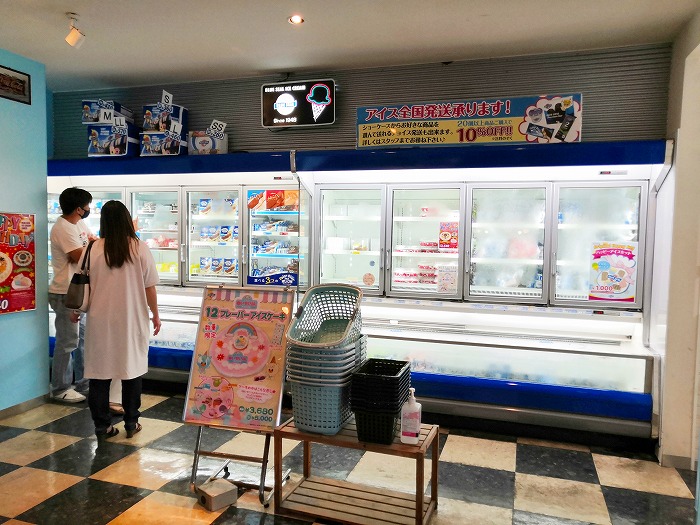 A takeaway ice cream corner that can be shipped nationwide.

12 flavor ice cream was sold in Okinawa instead of Christmas cake, but now it is a product that has a certain demand.

I thought it would be photogenic if I took a picture of the ice cream in front of the shop, but apparently I don’t have such kind of sense. 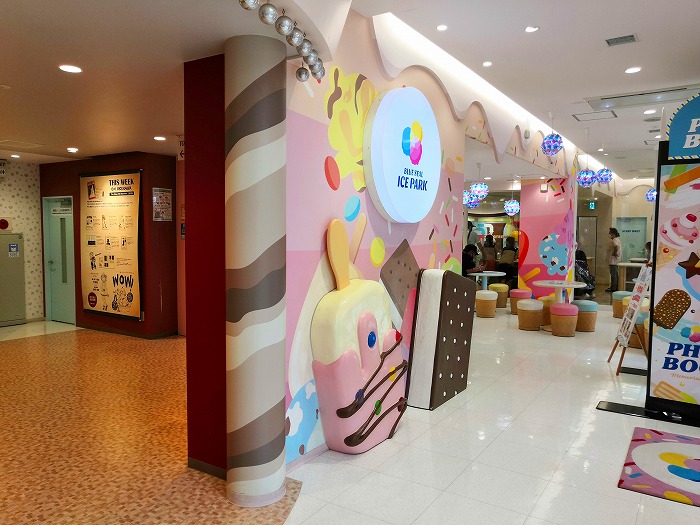 I saw a couple taking a picture with this object just inside of the entrance. 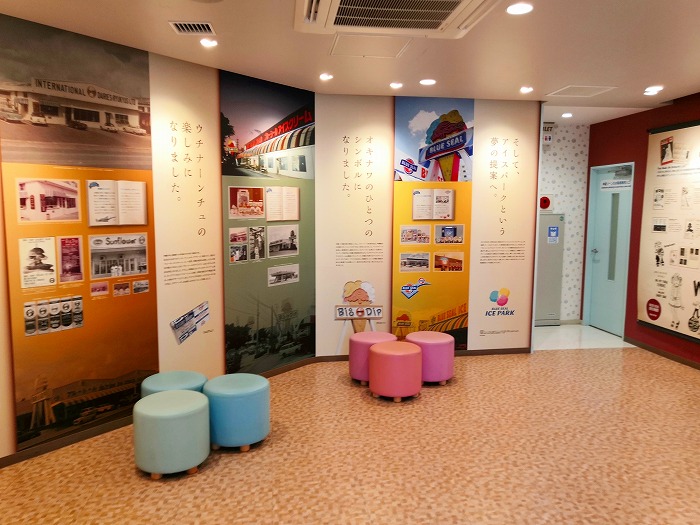 This is a corner introducing the history of Blue Seal. 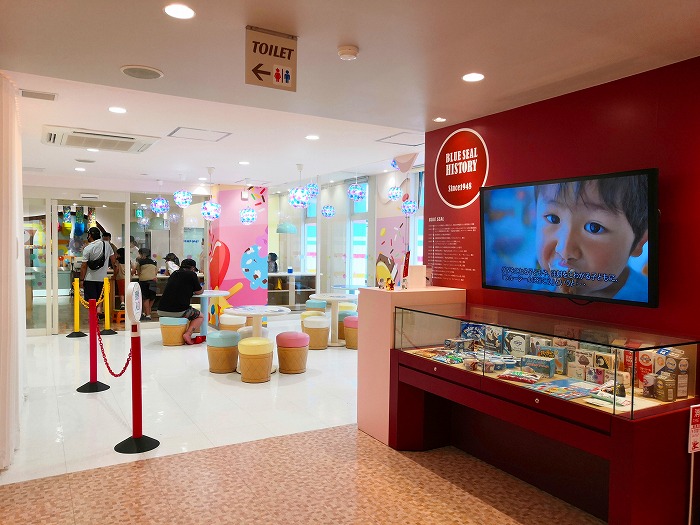 At the back of the store is the community zone.

You can experience making an original ice bar by yourself, said “the only one in the world, your own ice cream”. 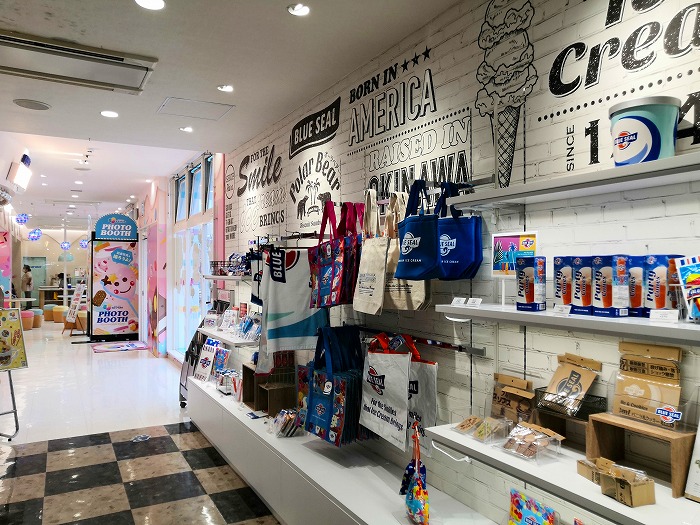 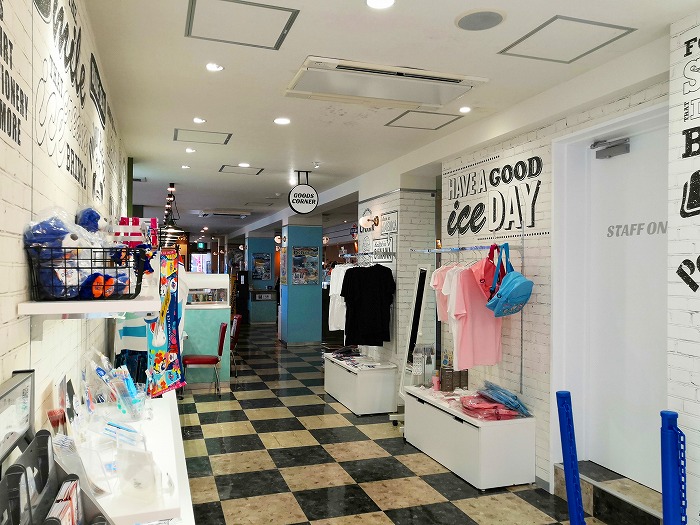 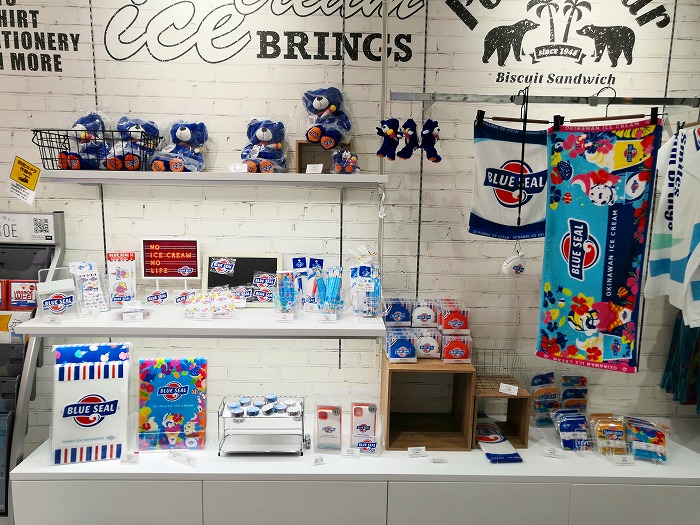 Towels and clear files with the Blue Seal logo, 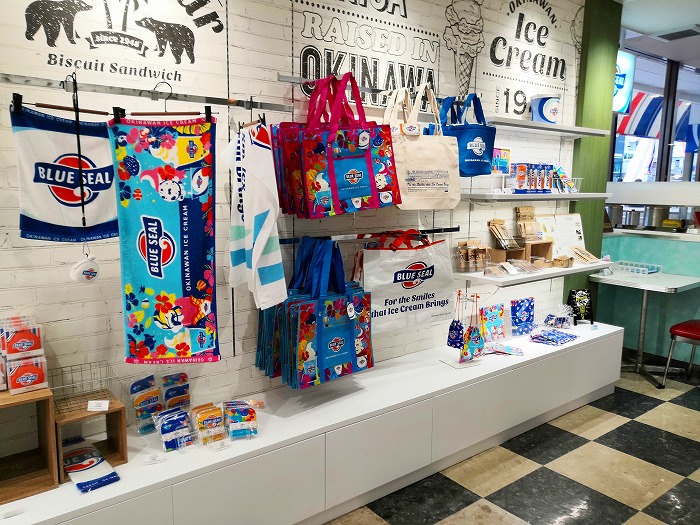 There are many small items and the tote bag.

The backyard of the parking lot of Blue Seal Makiminato flagship shop in Urasoe City. 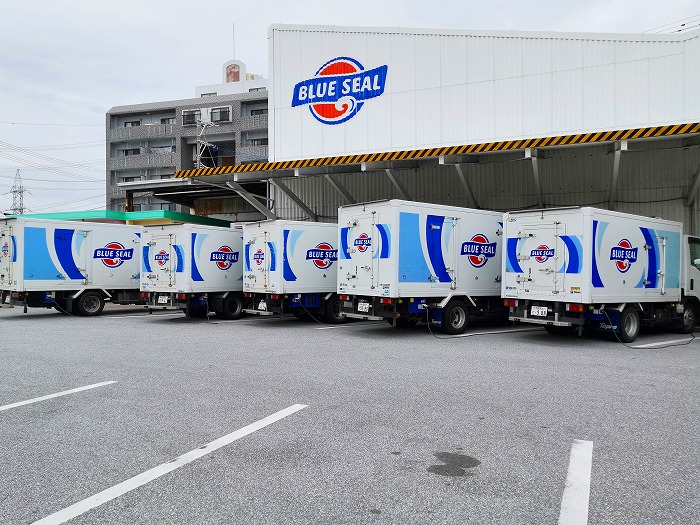 In the back of the parking lot, refrigerated trucks with the Blue Seal logo were lined up. 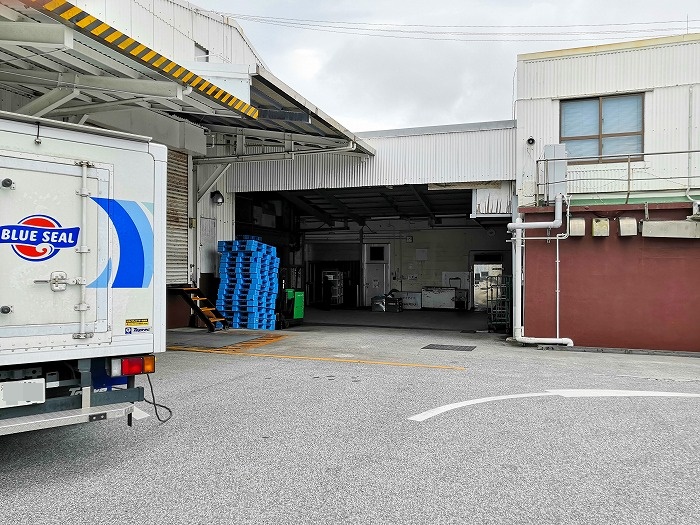 I talk to a staff member passing by,

She answered to me,

“No, this is a warehouse and the ice cream is made elsewhere.”