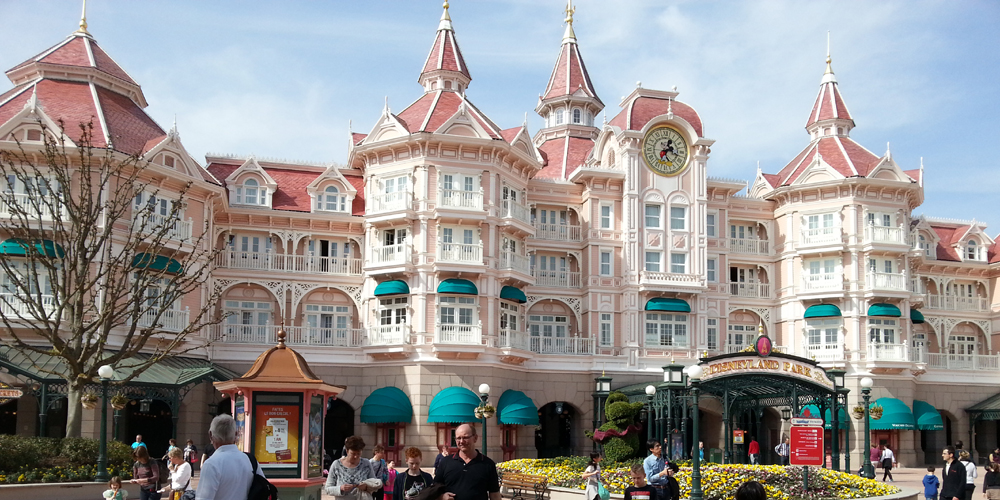 Disney Park Paris consists of “WALT DISNEY STUDIOS PARK” and “DISNEY LAND PARK”. It is started operations in April 1992. The symbol castle of Tokyo Disneyland is “Cinderella Castle”, but Paris is “Sleeping Beauty Castle (Aurora Castle)”. Hong Kong Disneyland and California also have Aurora Castle like Paris. Shanghai Disneyland is neither Cinderella Castle nor Aurora Castle, but “Enchanted Storybook Castle”. By the way, although it is not well known, there is also “Aulani Disney Resort & Spa” in Hawaii, and although there is no castle, you can meet Mickey and his friends. 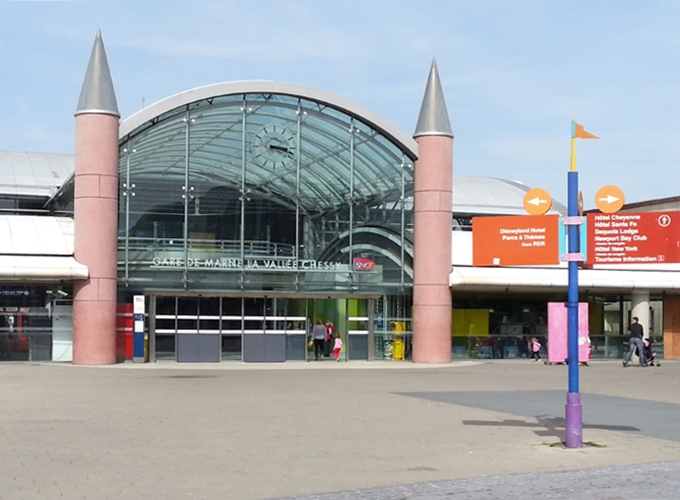 The premises of Chatelet are wide and a little complicated, but if you follow the information board carefully and walk towards “RER A”, you could arrive.

It took about 40 minutes to Marne-la-Vallée–Chessy station, and the fare was about 7 euros without changing trains.

By the way, “RER A” ends at Disneyland and “RER B” ends at Charles de Gaulle Airport. Mickey’s mark is also written on “RER A” in the information display, So this RER2 line is very easy to understand.

I arrived at Marne-la-Vallée–Chessy station without worrying about changing trains. When I left the station premises, there was Disneyland Paris just over there. It is no exaggeration to say that this station exists only for Disneyland Paris.

First of all, when you go through the security check and enter the park, you will see “WALT DISNEY STUDIOS PARK” in front of you and “DISNEYLAND PARK” on your right. After a bit of hesitation, I headed to the ticket office in “DISNEYLAND PARK” and bought tickets.

“Would you like a ticket for both the studio and the park?”

The clerk asked me.
Hmmm. I don’t know what kind of facility Walt Disney Studios is. Or rather, this is our first time at Disney, so we don’t know Disneyland itself. . . .

I’ve been thinking about it for a while. . .

“From this time onwards, Only Disneyland Park may be enough.”

…Well that’s will be fine. So we decided to give up on going to Disney Studios and go around Disneyland thoroughly.

My daughter seems to have liked the big baguette she bought with the salad at MONOPRI in Chatelet Station, and whenever she had time, she take it out from her bag and nibble on it.

In Japan, I had heard that it would be hard to try more than three attractions in one day at Tokyo Disneyland because of the crowd, so I imagined there would be a huge line at each attractions, but there was no line at all.

The only attraction there was lined up for about 10 minutes was “Autopia”. “Orbitron” also lined up a little.

From 21:30, we had watched a spectacular show with fireworks and fountains on the screen of Cinderella Castle. That was amazing…as expected of Disney.

We both father and daughter the first Disneyland was in Paris, And we were able to experience many attractions. I think the Disneyland Paris is nice and so valuable. 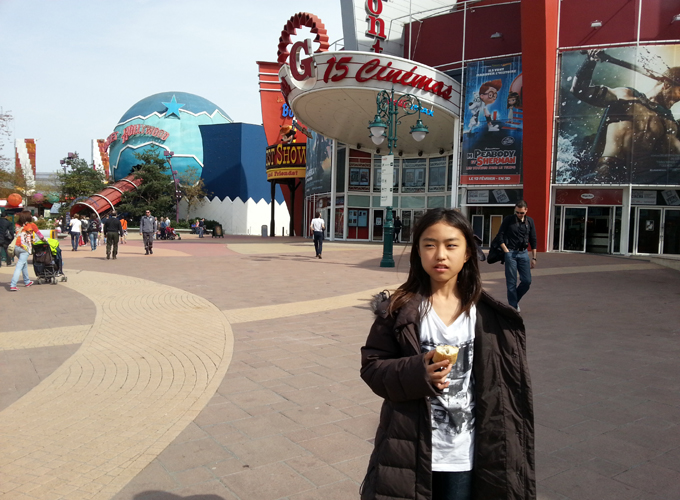 Wondering which one is the entrance to the park, then we go left to left…
Eh, the park is on the right? 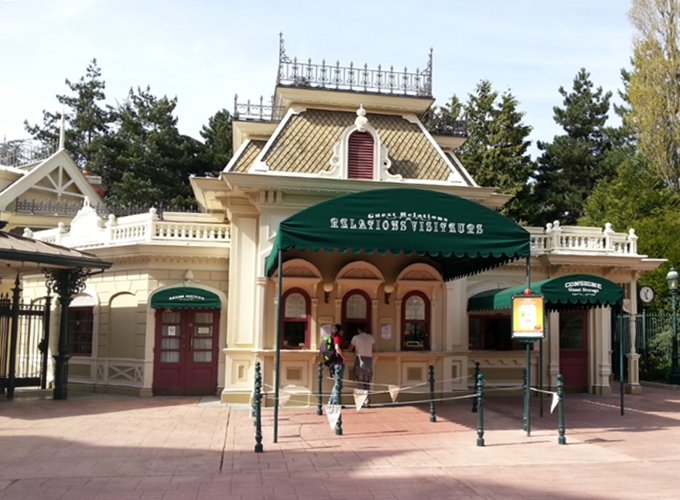 Everyone seems to buy tickets online before coming to Disneyland, and everyone enters through the front gate.
We didn’t have tickets so we looked for the ticket office. The ticket office was on the far right side of the park, but it took me a long time to find it.
As you can see from the photo, no one is there, That means no one buys tickets here.

By the way, if you are going to Disneyland Paris from now on, it is overwhelmingly cheaper to buy tickets in advance online.

You can purchase from the official website of Disneyland Paris, and the lowest price is from US$63.72. 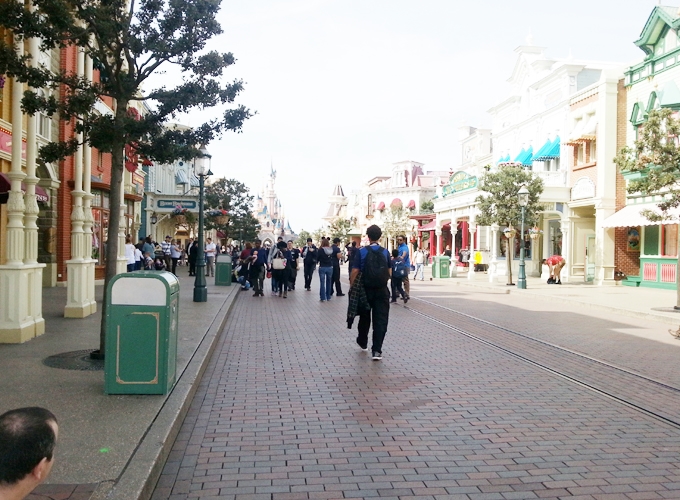 “Main Street USA”.
This street is the first street after passing through the entrance gate. There are arcades on both sides with various shops. In fact, I heard that only Paris has an arcade like this. 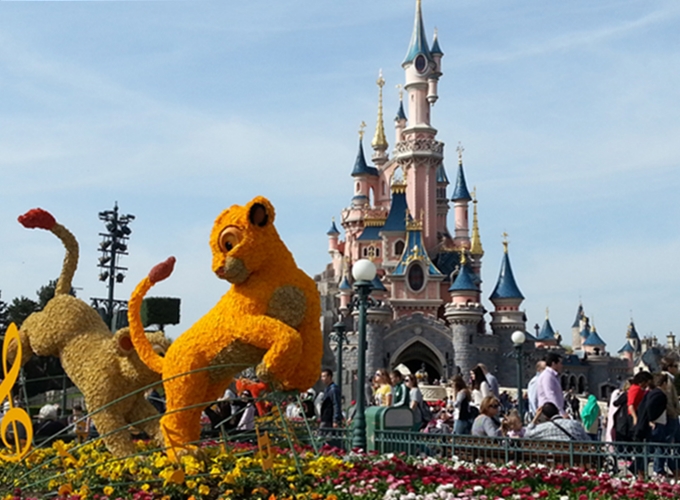 Sleeping Beauty Castle.
It looks like this during the day time. 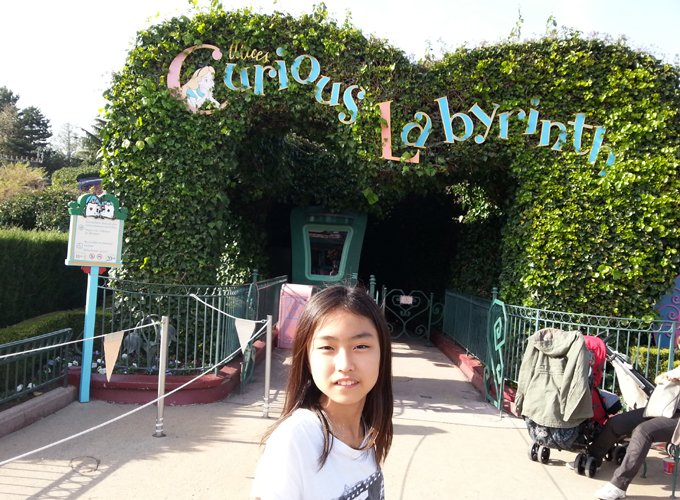 That’s just a maze, as the title says. 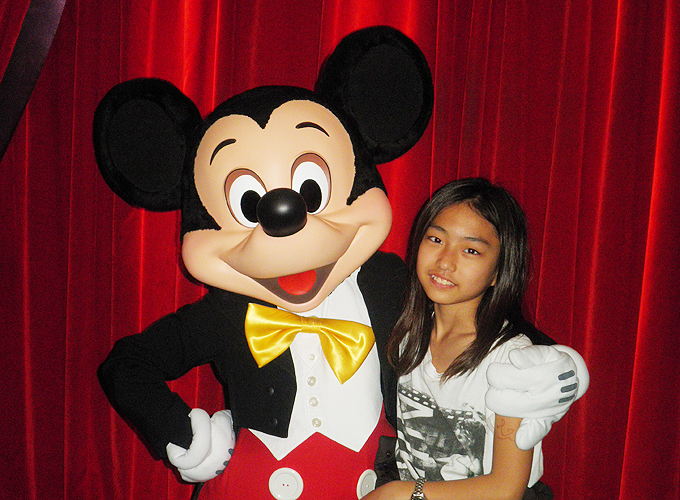 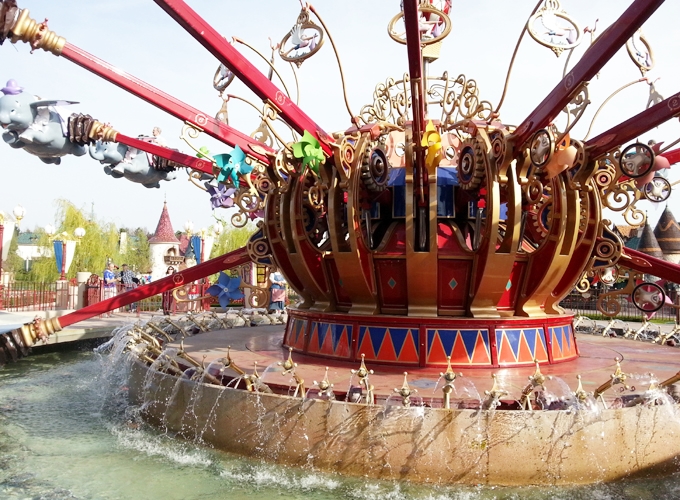 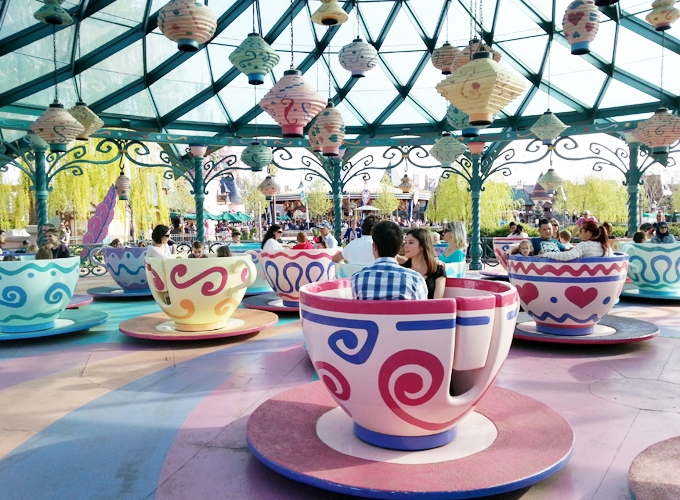 Mad Hatter’s Tea Cups.
It’s a tea cup with a motif of ‘Alice in Wonderland’. 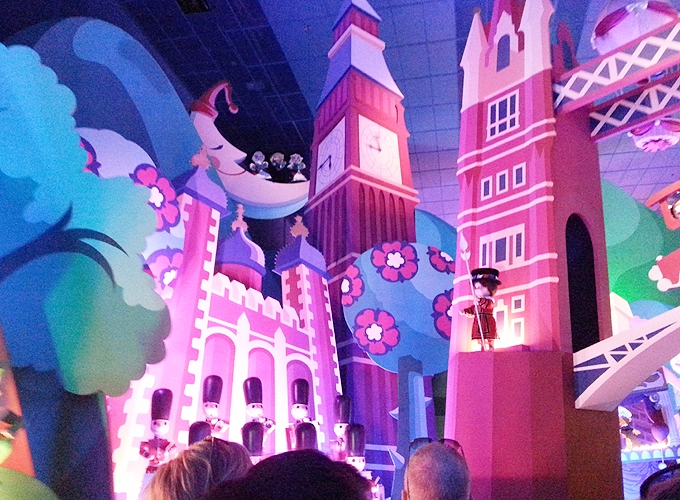 It’s a Small World.
This is the only one I knew well since before. 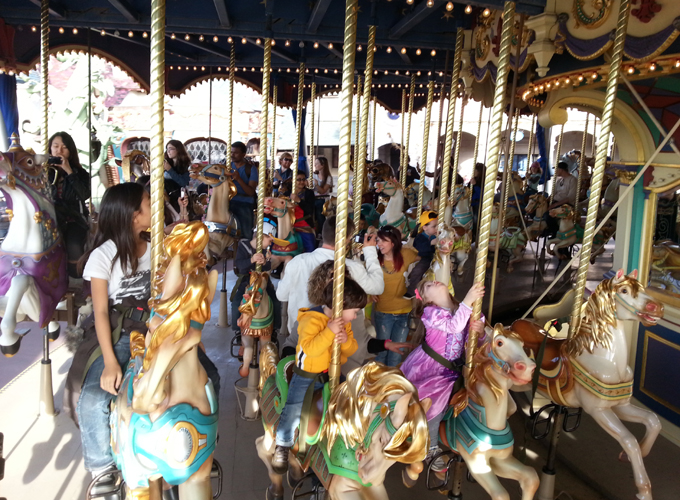 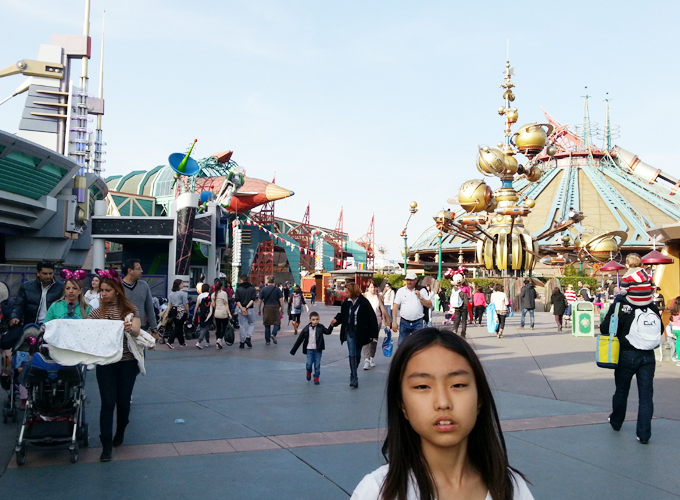 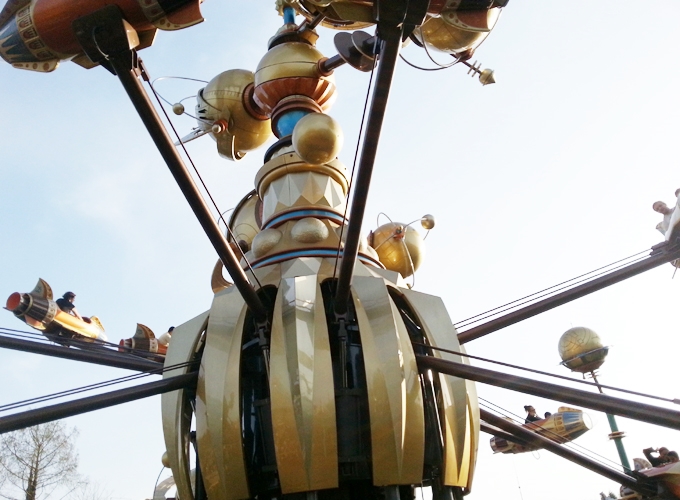 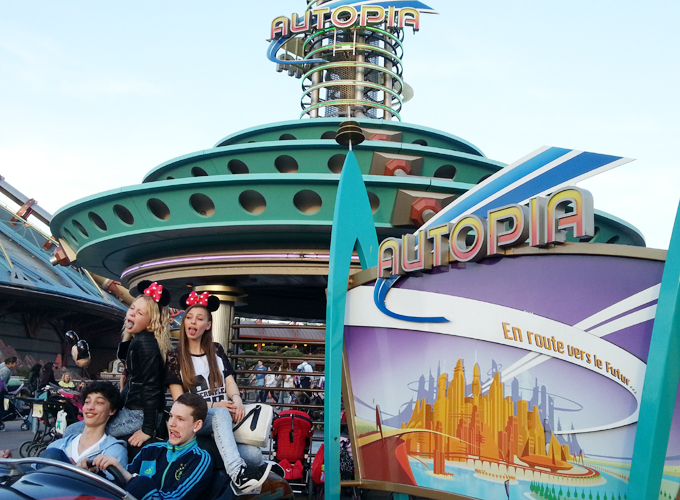 It’s a go-kart running on rails. 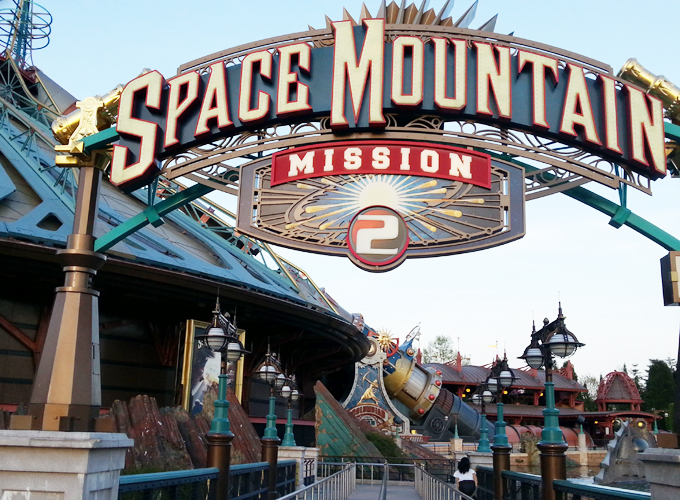 My daughter left dad and went to ride a roller coaster alone. This is the first time she’s been away from dad for even a moment on this trip.

But roller coaster type attractions are impossible for me.

By the way, this is different from Tokyo Disneyland’s “Space Mountain”, and I heard that is an original attraction in Paris. 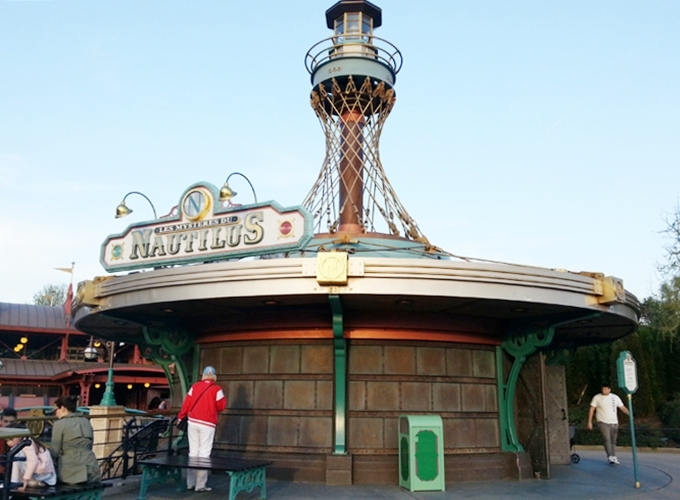 The Nautilus.
An attraction depicting the interior of the submarine Nautilus led by Captain Nemo. 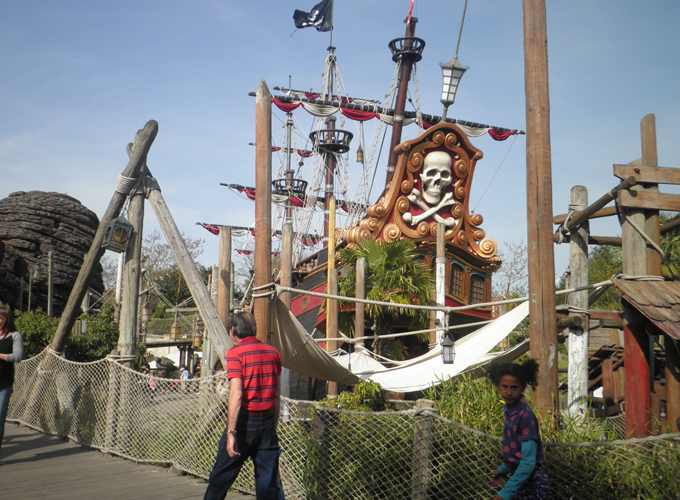 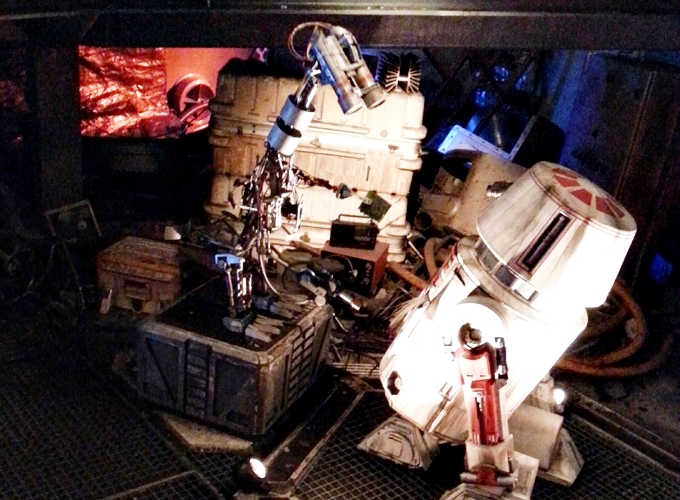 Sit in a chair and fasten seatbelt, Then the room tilts according to the video, and shakes violently.

This is so real, It really feels like you’re about to be thrown out. I thought it wasn’t so scary, but it’s scary enough! 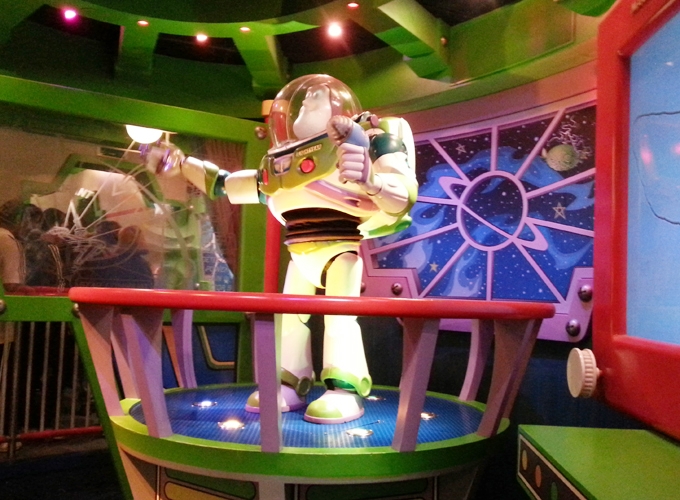 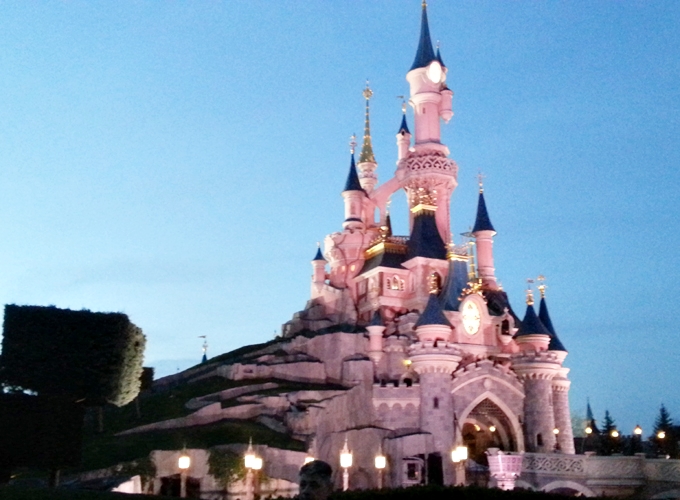 In the daytime, the basic colors are navy blue roofs, pale pink towers, and gray. 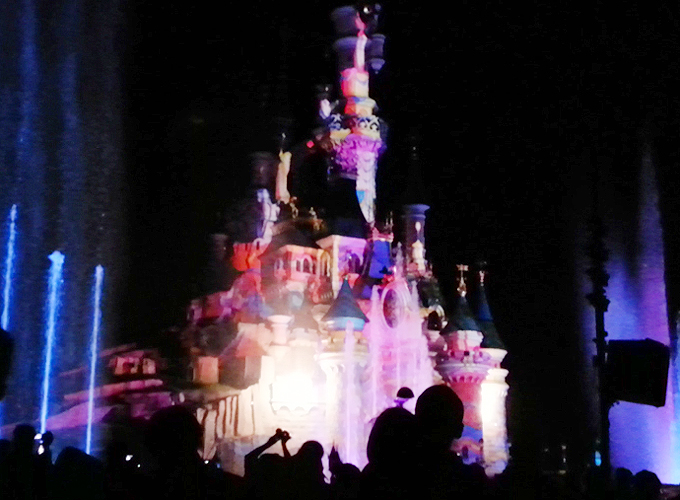 A projection mapping show of fireworks, fountains and fog with Sleeping Beauty Castle as the screen. 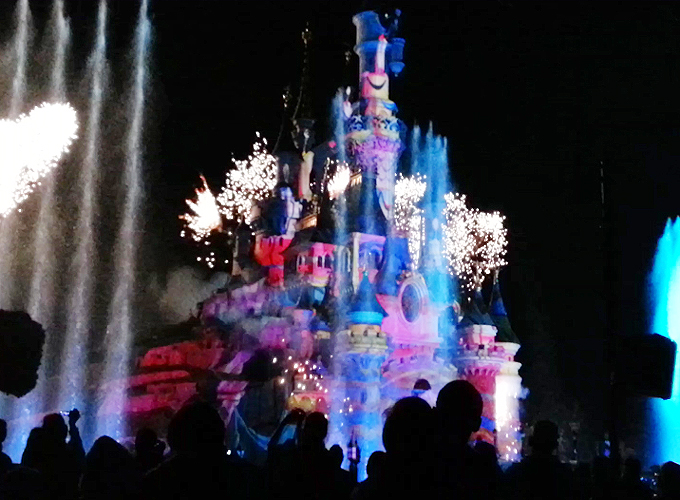 In the daytime, the sober castle becomes very colorful with projection mapping.

Fog is forming as if enveloping the castle, and the image has become fantastical. 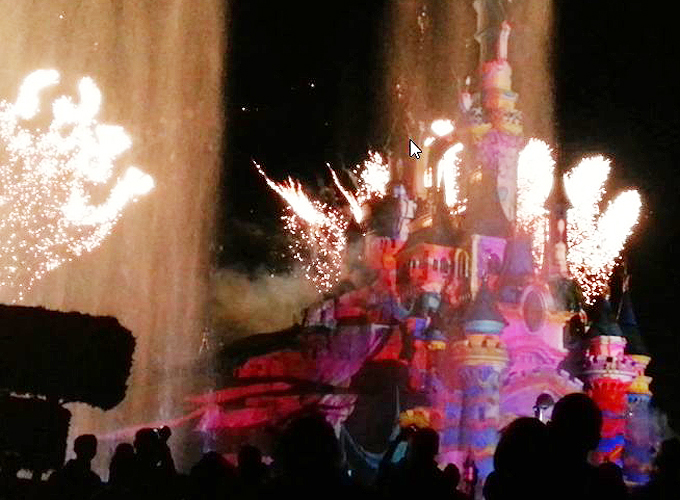 The show of water cannons, fog, fireworks and projection mapping is heating up. Bring it to the climax.

After this, I arrived at the hotel around 23:00, and the brasserie and cafe on the street were closed. Of course my favorite MONOPRI is closed. I bought ham and some beer at the small supermarket near the hotel and went home.

The map of Disneyland Paris, France.