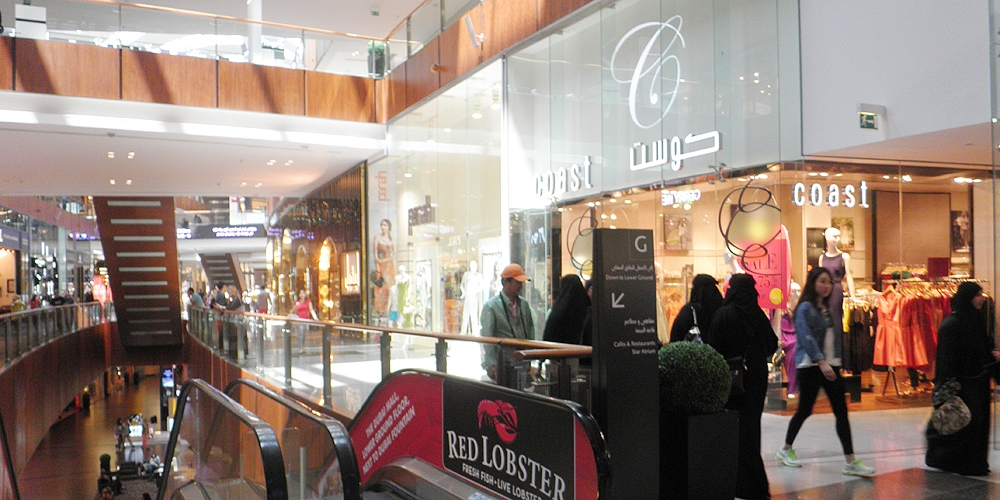 UAE – Dubai Mall, One of the world’s largest mall. The Dubai Mall, which has many of the world’s best, is basically a shopping mall where famous brands from all over the world gather. People from various countries come and go, and the atmosphere is very international. Of course, Dubai is a member of the United Arab Emirates, where Islam is the state religion, You can see many women wearing hijabs walking around malls.

The daytime view of skyscrapers seen from a taxi heading to Dubai Mall is a modern spectacle of unique buildings lined up, attracting many visitors.

Not like Tokyo or New York city, there are no old buildings mixed in, and all the buildings are new. 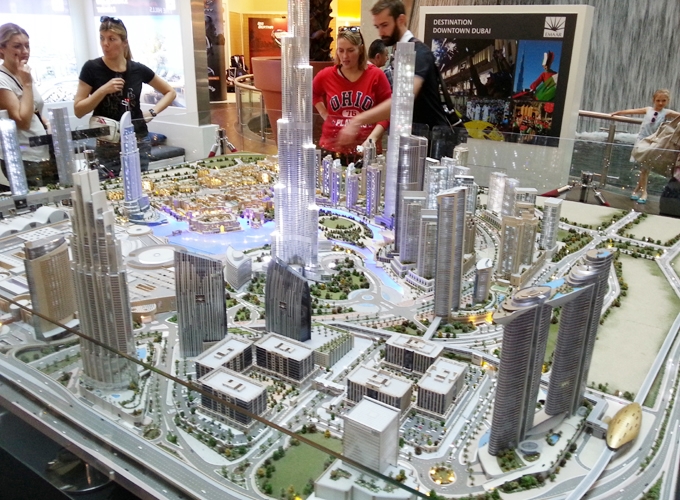 As always, I didn’t have prior information about Dubai Mall, so I decided to walk around at random.

After walking for a while, there was an “information”, so I got a guidebook with a map called “The Dubai Mall Guide” and put the general outline in my brain.

It is possibly a little different, but in terms of construction, it’s a complex facility with famous brand shops, a huge aquarium, an ice skating rink, a souk, a movie theater and a food court.

If you get a guidebook, you’ll know more about this Dubai Mall. 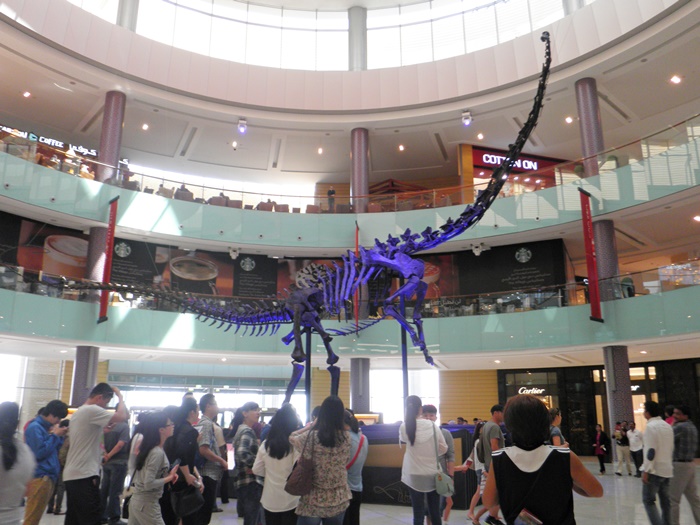 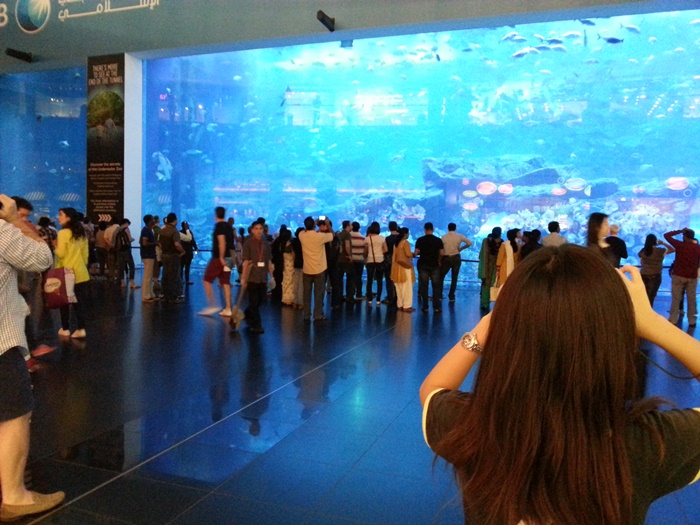 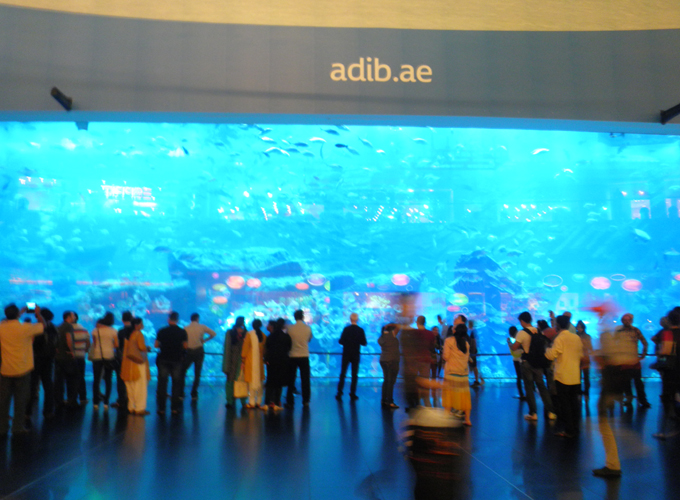 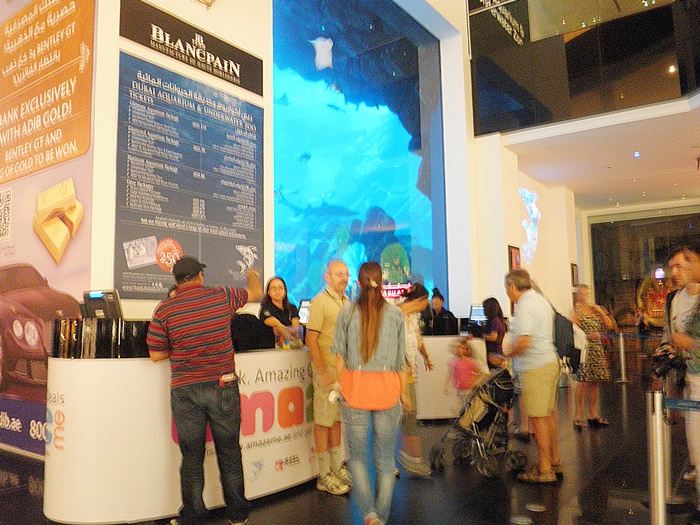 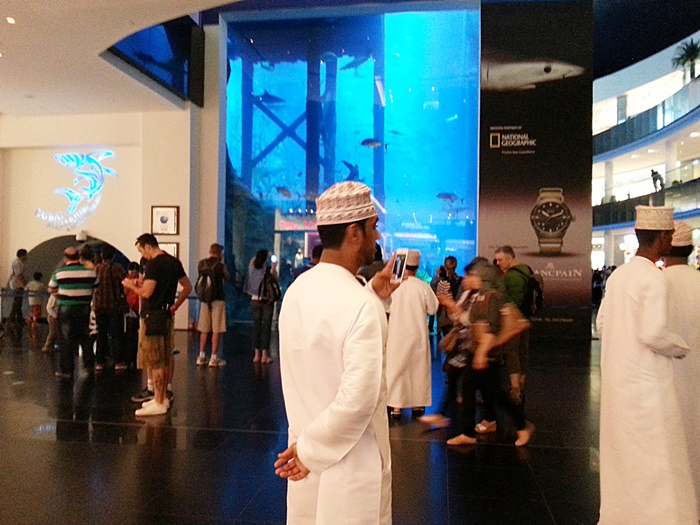 The Guinness World Record before the Dubai Aquarium was the Okinawa Churaumi Aquarium. 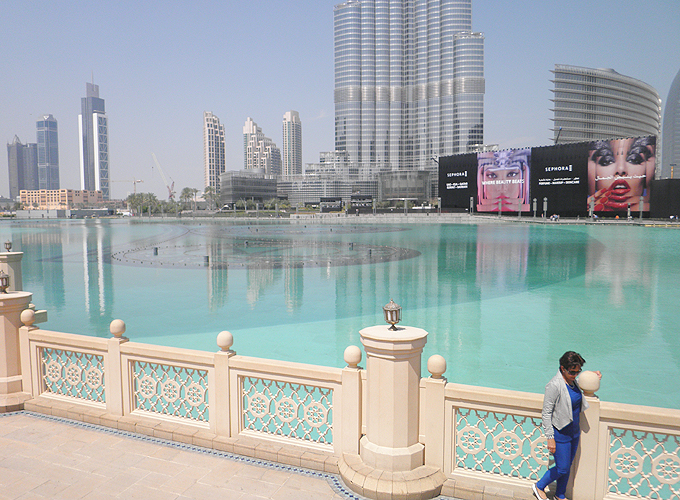 When you go outside the Dubai Mall, there is a huge pond with the world’s largest fountain called “The Dubai Fountain”, and beyond that there is the world’s tallest skyscraper “Burj Khalifa”. 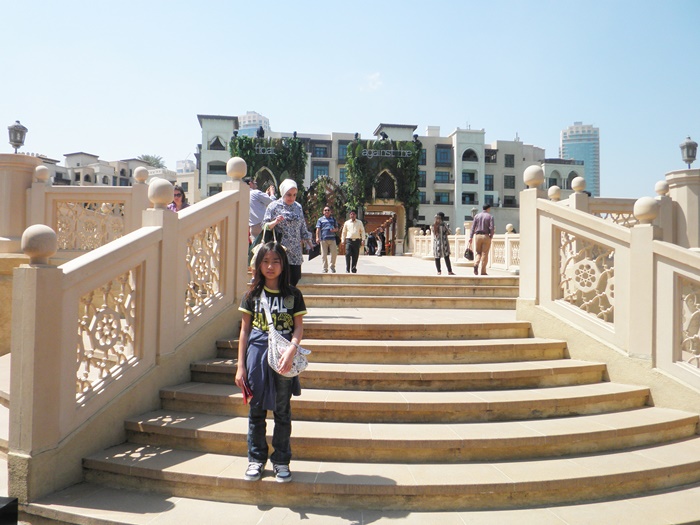 Cross the bridge right in front of the mall and beyond is”The Old Town Island“. 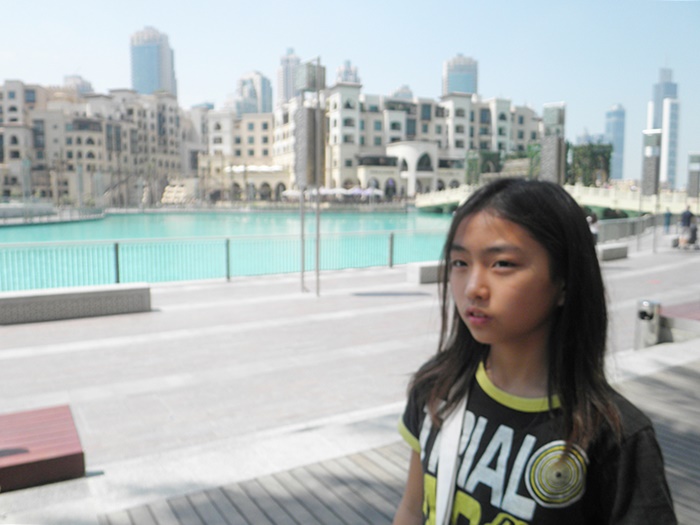 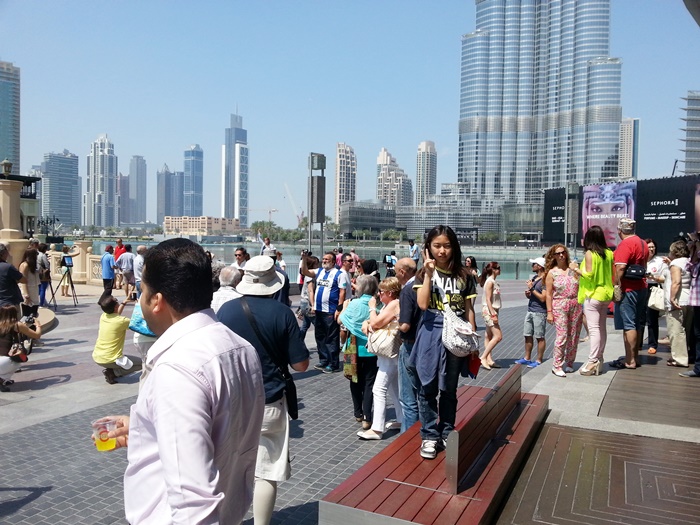 The buildings around the Burj Khalifa are also quite tall….

I know how tall the Burj Khalifa is. 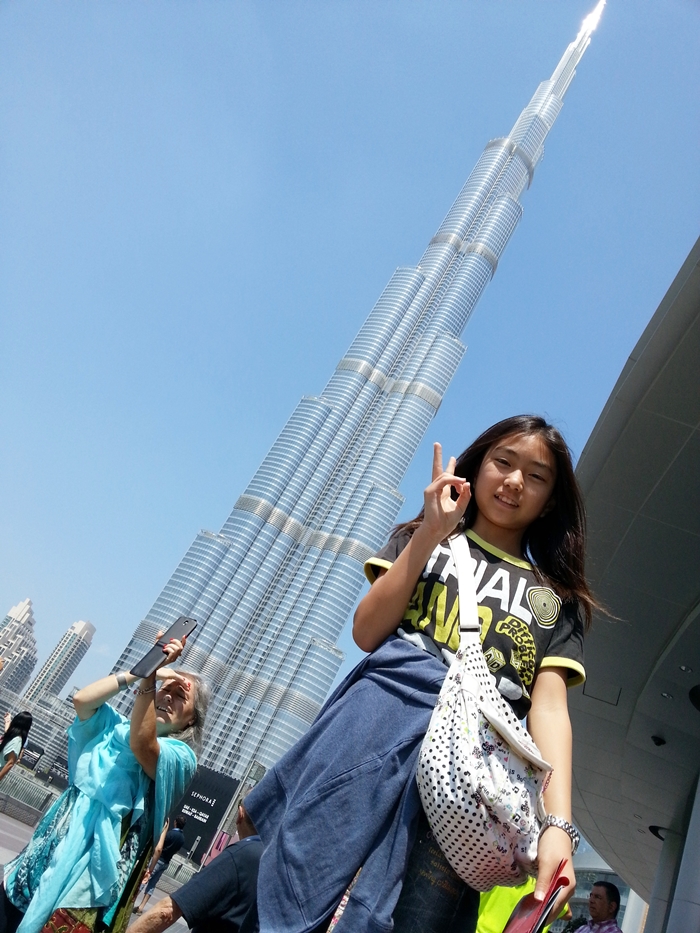 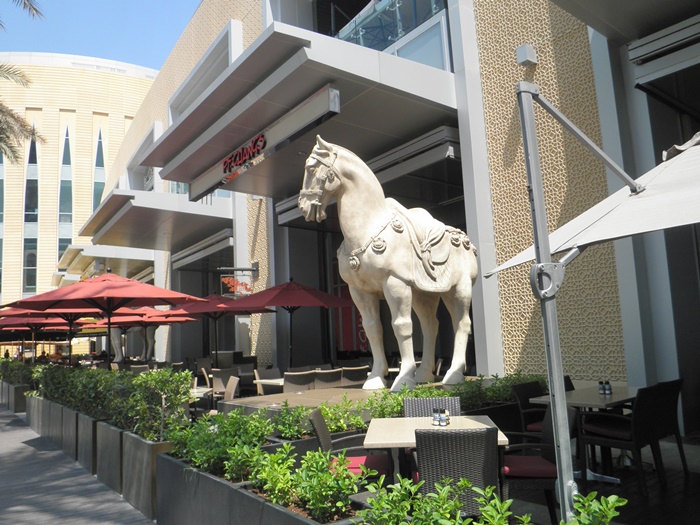 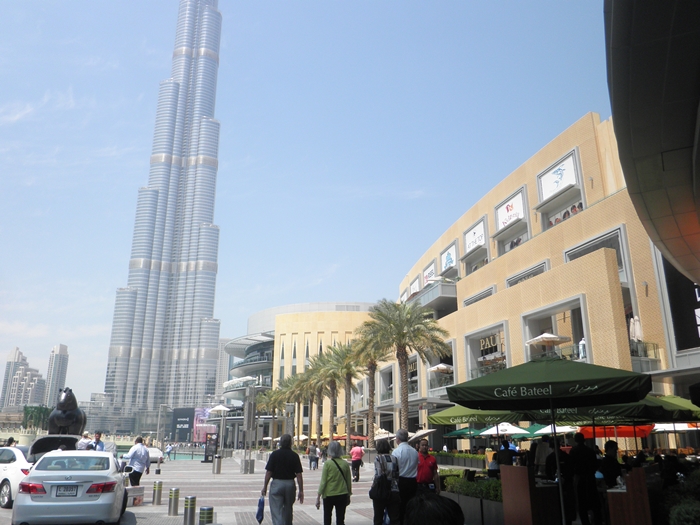 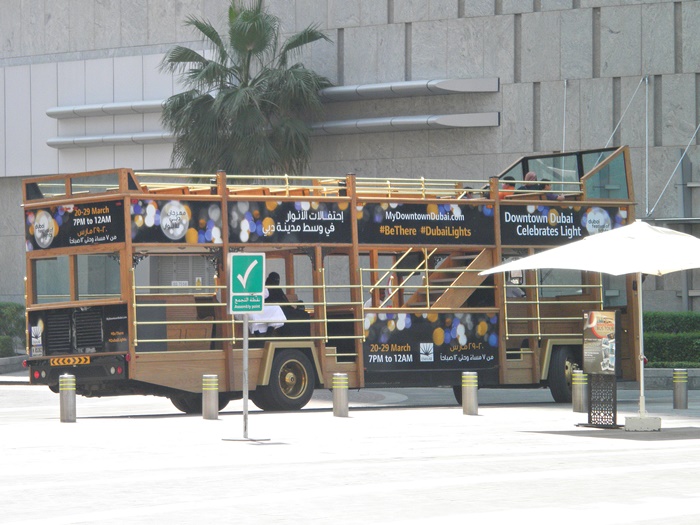 A stylish wooden double decker was parked, probably for sightseeing. 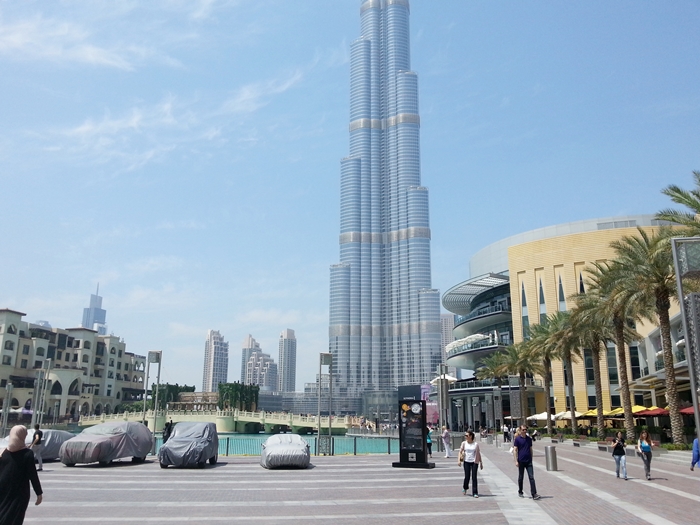 Burj Khalifa is too big to take a picture of the whole even if you come to the edge of Dubai Mall. 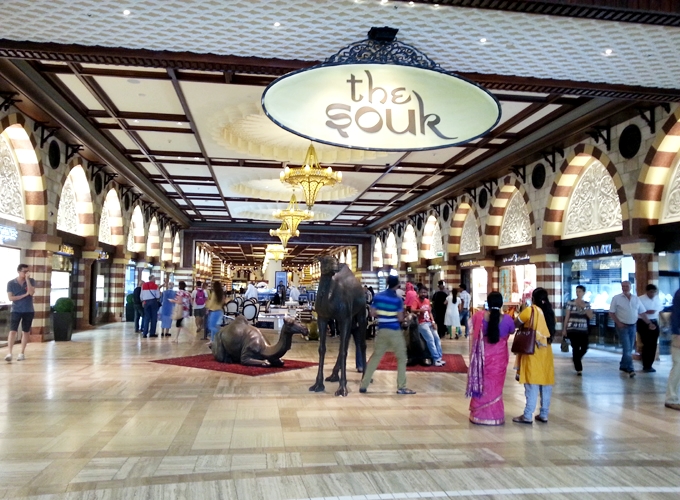 Generally speaking, ‘souk’ refers to an open-air market, so this souk in Dubai Mall is also called ‘indoor souk’, and I heard this one is ‘the world’s largest indoor souk’.

There are a lots of “The most” in here Dubai. 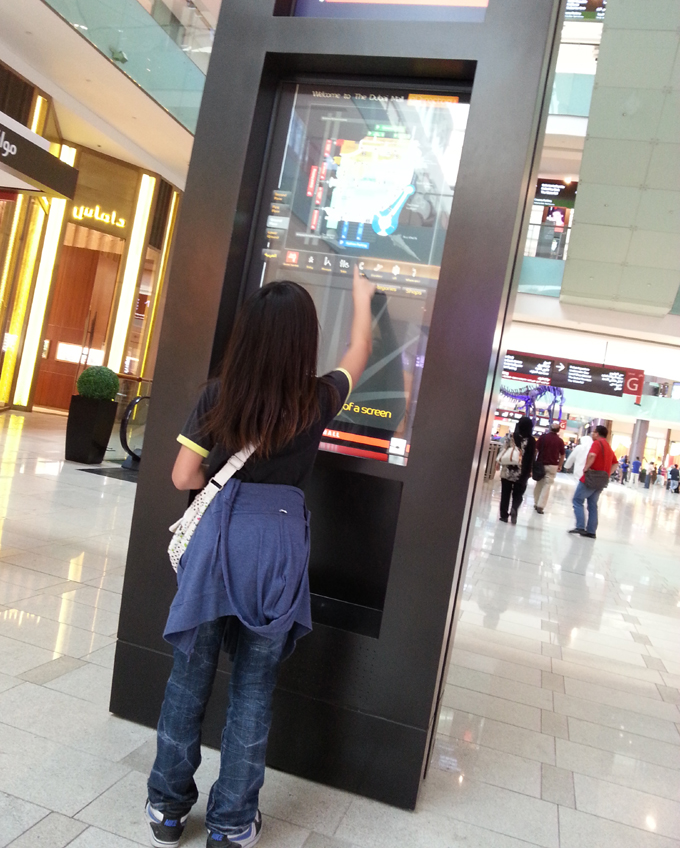 There are touch panel guides here and there in the Dubai mall, but this mall is so big that you might not be able to reach the shop you want to go without it.

I checked later and found out that there are nearly 1,200 tenants in the Dubai mall. 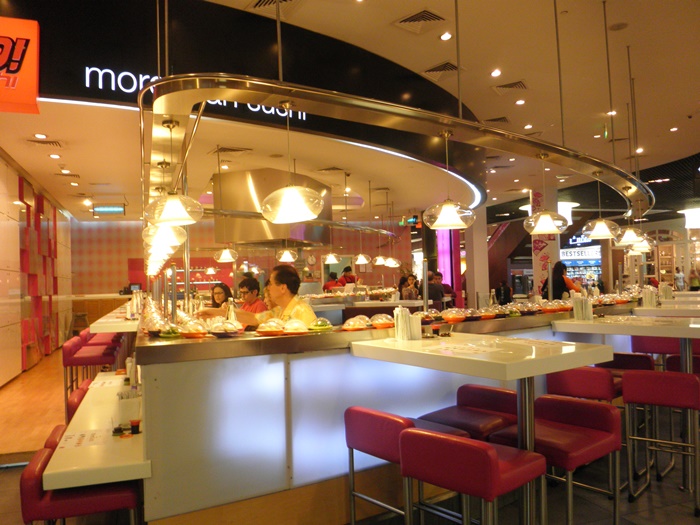 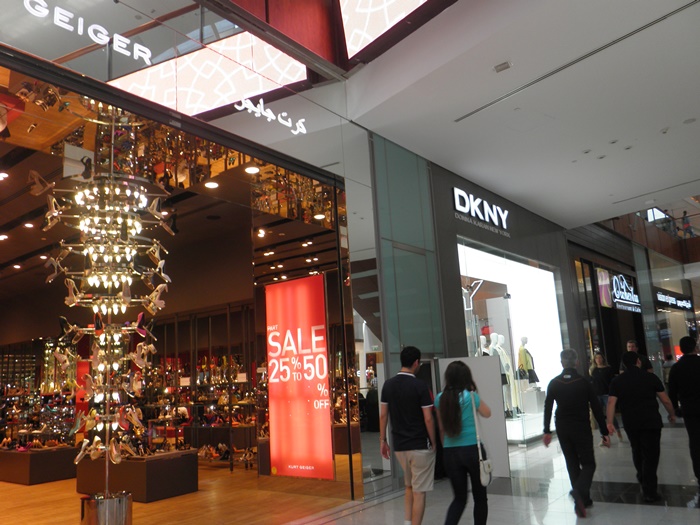 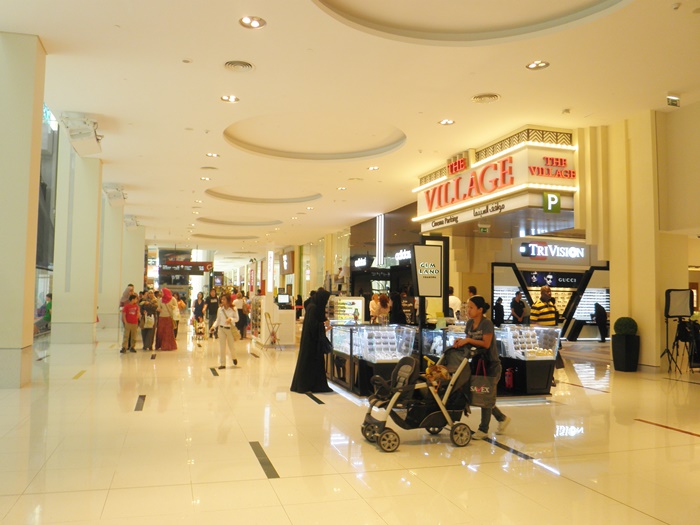 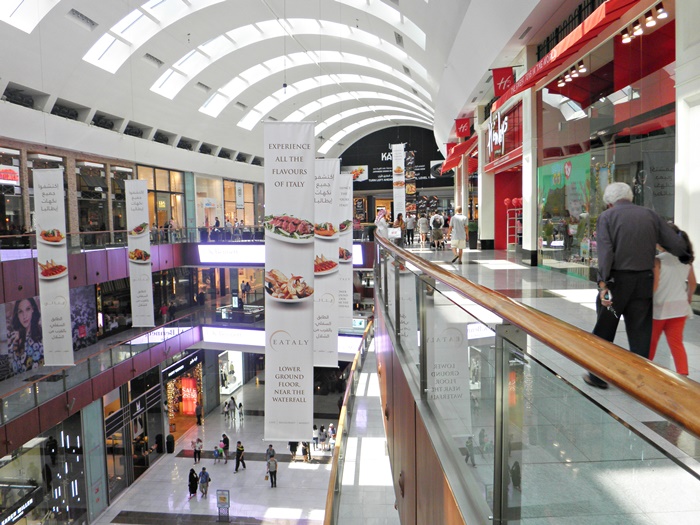 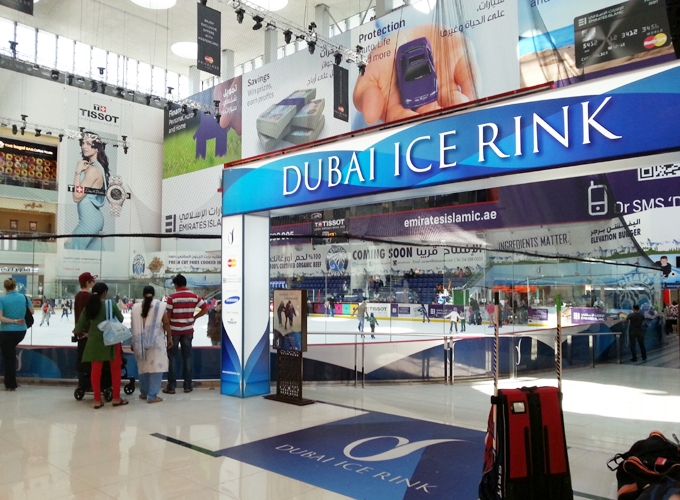 My daughter wanted to go ice skating, so I asked her to come in by herself, and I walked around the Dubai Mall for about an hour. 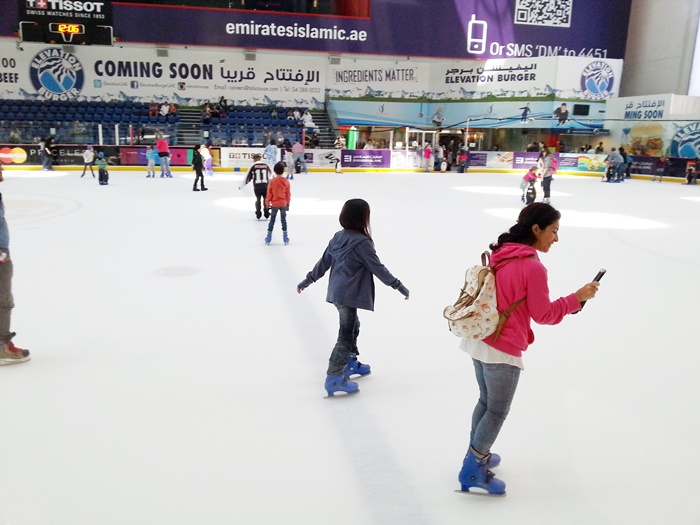 She had ice skated in Okinawa and Korea, too. 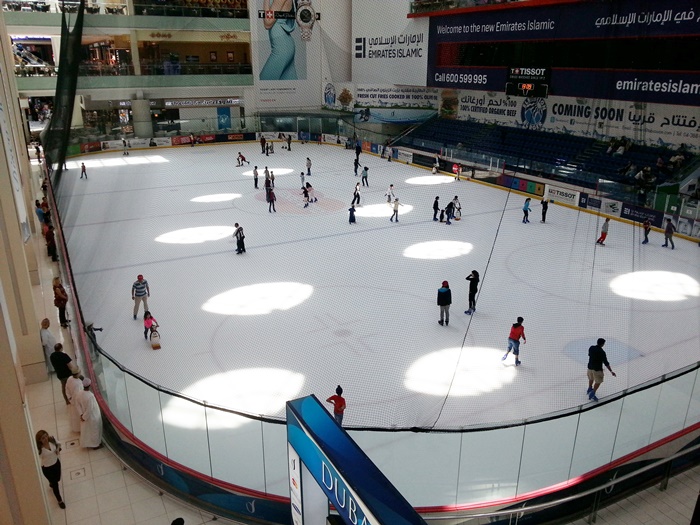 Since we were separated for a while, free WiFi was useful for meeting here as well. 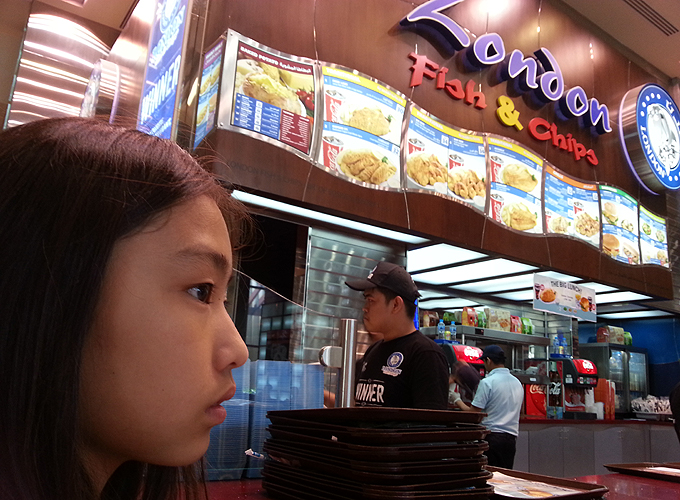 After enjoying each Dubai mall for a while, eat “Fish & Chips” and “Bento” at the food court. 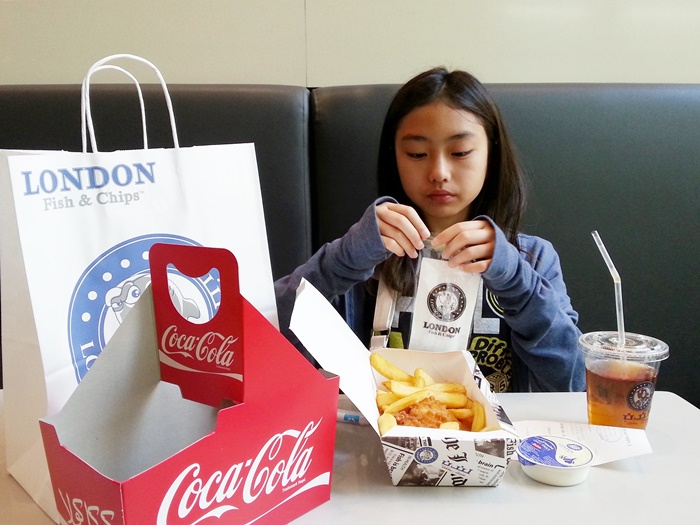 Such a big paper bag to put just a set of fish and chips in.

Coke box is also such big. 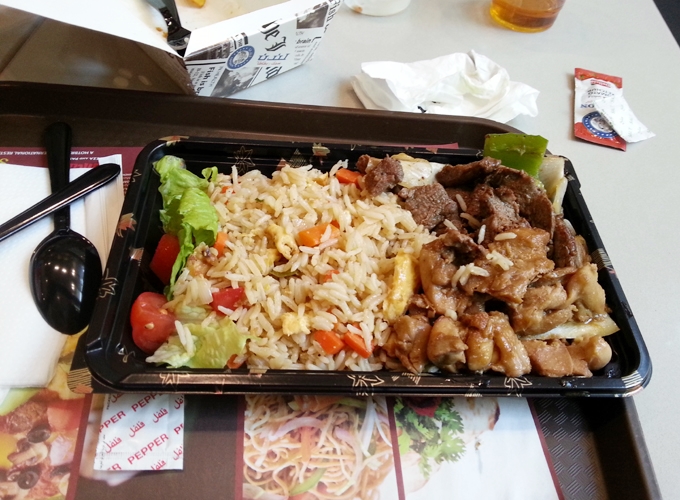 After a light meal, we head to the taxi stand to catch one, and prepare for the next scheduled “Dubai Desert Safari Tour”. 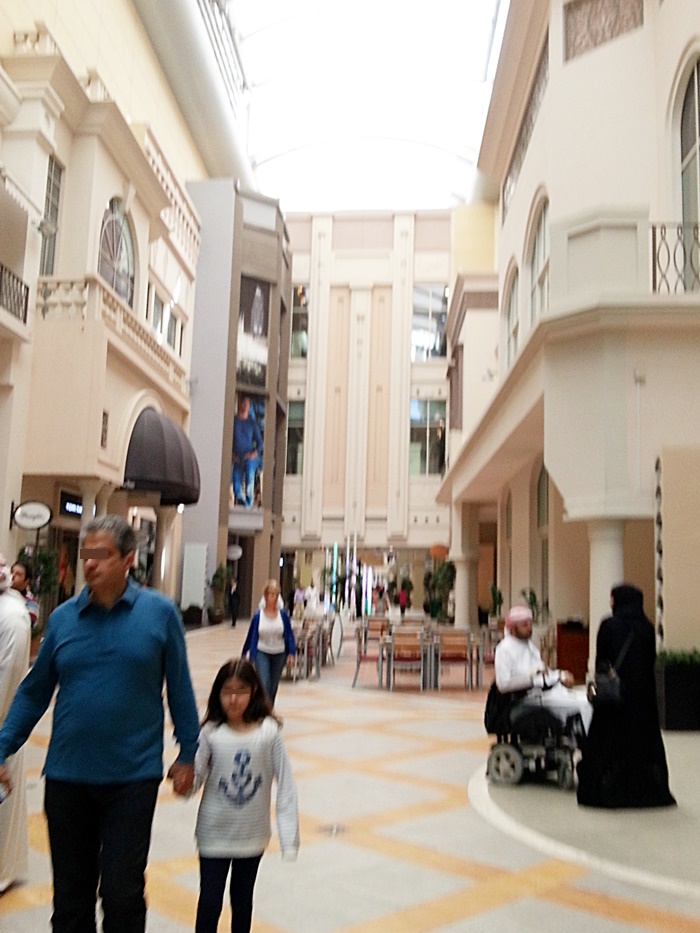 I got lost here too.

Come on, We have no much time…

There are countless taxis waiting in three rows at the taxi stand, picking up customers who come one after another.

Unlike when we arrived, we were able to get into the taxi without waiting for even a second. 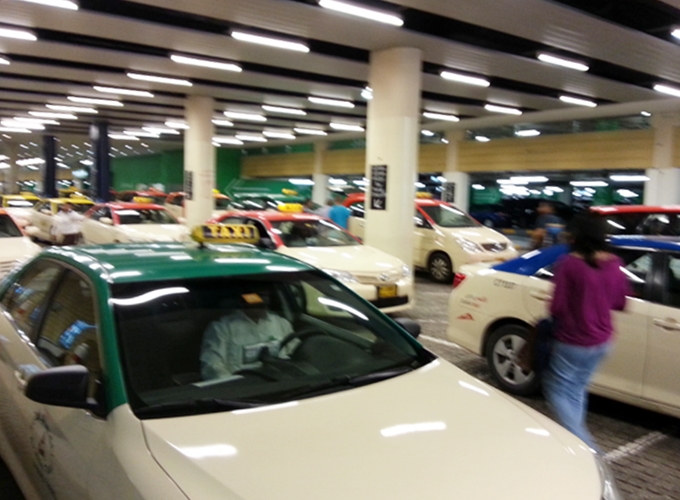 This is all taxi…